Historian: Falklands conflict will end over time | World| Breaking news and perspectives from around the globe | DW | 01.04.2012

On April 2, 1982, Argentine forces invaded the remote Falkland Islands off of its coast. Over the next weeks, Argentine and British forces engaged in battle over the chain, ending in the Argentine surrender on June 14. 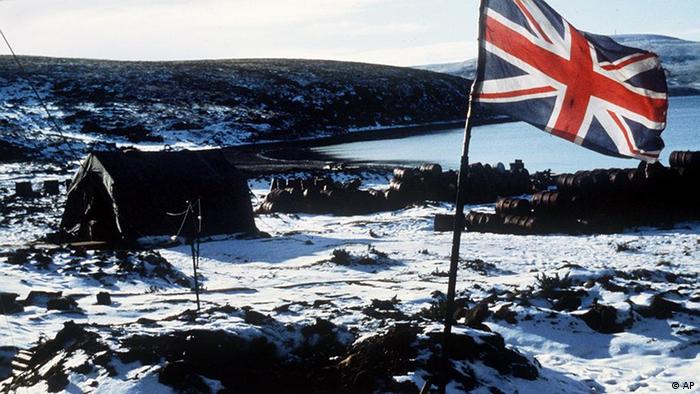 Born in 1932, British military historian Martin Middlebrook has written numerous books that deal with significant turning points in the two world wars. He is also the author of two books about the Falklands War, one from the Argentinean and one from the British and Falkland Islanders' perspective. Middlebrook is a fellow of the Royal Historical Society.

DW: In the introduction to one of your books you wrote: "I do not care to write about politics and diplomacy, but war fascinates me." If we look back to 1982: what fascinated you about the Falklands War that made you want to write about it?

Martin Middlebrook: Because it was very unusual. Most of my books up until that time had been about the First and Second World Wars, so prolonged conflicts. But what happened in 1982 came out of the blue and once two things happened - the (Argentinean vessel - ed.) General Belgrano and the (British ship - ed.) Sheffield were sunk - then I realized what had started as a maneuver of forces is now going to become a shooting war.

To many people, the decision by the British government at the time to engage in a conflict with Argentina seems in retrospect to be rather bizarre.

I don't regard it as bizarre. There are certain principles behind what happened in the dispatch of the Task Force that have to be examined and that remove the bizarreness of the procedure.

In your book you point out that whoever controls the Falklands will be in a commanding position over approximately one-sixth of the world's last oil and mineral reserves. Do you think this was something the British government was aware of when they sent out the Task Force?

I don't remember oil being mentioned much at the time. I think the future of Antarctic may have been in the background. I think what is more important was the presence of the British in Port Stanley, and the settlements were an aggravation to the British government as well as to the Argentine government. If the people of the Falklands had said: we think we'd be better off joining up with Argentina, I think the Foreign Office would have been highly delighted because it was a source of aggravation. It was affecting Britain's relations with countries in South America. But the 1,800 people quite clearly said that they wished to be British. And I think that overrides everything: the Argentine claim, any prospect of oil that may or may not be found and eventually the importance of Antarctica, which given indefinite time, will become the only place in the world with resources of valuable minerals and oil. 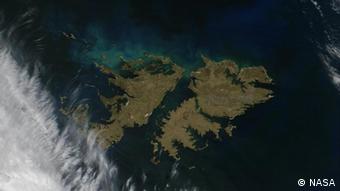 The Falklands are located some 13,000 kilometers from Britain, off the coast of Argentina

The primary point is that the Argentines had used considerable force to occupy a country that did not wish to be occupied. And Britain - if I might say - has a long and honorable record of liberating occupied countries. I think that was far more important. I think if you also examine the Argentine reasons for going into the Falklands. They have got far more political problems and attention could be diverted from them by a successful occupation and retention of the Malvinas. They occupied it without any trouble; retaining it was a different matter.

There was a five-year difference in timing between my writing about the British Task Force and the Falkland islanders. I had to wait until I finally got a visa to go to Argentina.

Was your perspective changed by the experience of looking at the Argentinean side of things?

My perspective was not changed because I had gone with an open mind. But the fact that the Argentine people believe so strongly that the Malvinas should be theirs - despite the wishes of the inhabitants - was reinforced by speaking to so many people in Argentina. It's an obsession with them.

Earlier this year, Argentina got very upset about the Royal Air Force sending Prince William as a helicopter pilot out to the Falklands and they alleged that Britain was militarizing the South Atlantic. Was it?

The actual strength of units out in the Falklands has not changed. Prince William is trying hard to be an ordinary member of the Royal Air Force and he specializes in Search and Rescue, which is not an aggressive role at all. I think it was maybe badly timed by the RAF to send him out at this time but it's no more than a minor failure. 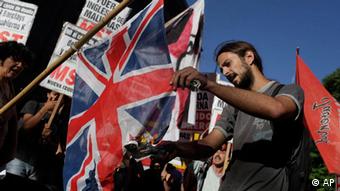 Argentinians are opposed to British control of the Falklands

The RAF and the British government have every right to send who they like to the Falklands, as long as it has not physically escalated the threat to Argentina. It just gave the Argentines another chance to whip up this emotion that they bring to light whenever they're in trouble politically at home. I don't think the Argentine political or economic system is particularly stable at the moment and this does provide a very nice outlet for their feelings and a diversion from what's happening.

I have been following the papers all the time and I do detect that there are now the beginnings of serious people in Argentina who are saying look this obsession with the Malvinas is being carried too far and we ought to acknowledge that we do not have the support of the United Nations or the rest of the world and it is damaging our prospects. I think if we watch this carefully in the future - maybe 10 or 20 years - we may find that the position in the South Atlantic stabilizes and the Argentines withdraw the threat to go again and try to get the Falklands back by one means or another: diplomatic, political, economic or military. I certainly don't think it'll be military. They had an absolute thrashing in 1982 and I don't think they would risk that again.

The United Kingdom and Argentina are ratcheting up the contest over the Falkland Islands in the southern Atlantic, this time over oil exploration, nearly 30 years since their conflict over the island chain. (16.03.2012)

Argentina has said Britain is beefing up its military presence around the Falkand Islands, alleging that London may even have introduced nuclear weapons to the region. Britain has adamantly rejected the accusations. (11.02.2012)

Argentina's regional allies have backed its claim to the Falkland Islands as a dispute with Britain over oil escalates. The UK has started to drill in waters off the islands, a move Argentina has formally objected to. (24.02.2010)