From New York to Oslo and Moscow to Tokyo, German wine is in greater demand than ever -- in the upper price categories above all. 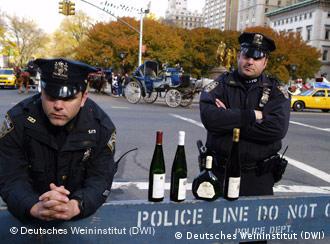 US imports of German wine have trebled since 2002, despite the weak dollar

German vintners had one of their best years ever in 2007, with global sales of 635 million euros ($990 million) in Riesling, Mueller-Thurgau and Silvaner. The British are the Germans' biggest customers, and they're burying the cliche: instead of quaffing cheap, sweet "Liebfrauenmilch," they're shelling out more money for German whites that are full of character, that is, wines whose flavor reflects the terroir in which they were grown.

Until recently, the French seemed to have copyrighted the term, which refers to the effect that local conditions -- the quality of the earth, the angle of the sun, the microclimate -- have on grapes.

But German vintners growing interest in these factors and their increased skill have led to more individuality in their wines. Nowadays, ever more German wines have unique flavors, such as Riesling that tastes vaguely of slate or Silvaner with a hint of limestone. They offer a strong contrast to the mass of Chardonnay and Cabernet Sauvignon that come from all over the world and may taste nice, but are often interchangeable. 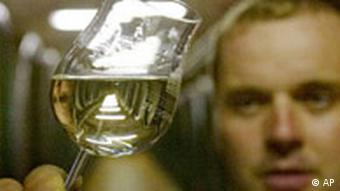 German wines are no longer just for quaffing

The US offers an example of German wine's new popularity. American companies imported 47 million euros in German wine in 2002. By 2007 the amount had trebled, despite the weakness of the dollar which had jacked up the price of European wine.

Popular on the home front

German wine has also gained popularity at home. Over half of the money German consumers spent on wine last year went toward local bottles. And in an upset to another cliche, Germans spent more money on wine than they did on beer -- for the seventh year in a row.

That's part of the reason Dusseldorf's "ProWein" has evolved into Europe's most important wine and spirits trade fair. Although Vinexpo in Bordeaux and Vinitaly in Verona are more glamorous, ever more wine traders, sommeliers and vintners are coming to Germany to pick up on the newest trends. This year 3,000 exhibitors from four dozen countries are showing there, more than ever before.

Ready for a good year

Although they aren't yet ripe, professionals will get to taste the first German wines of 2007 at the fair, which runs until Tuesday, March 18. Despite the rainy summer in much of the country, it's expected to be a good year, since a long growth period counts more for a nice wine than hot, sunny days do. 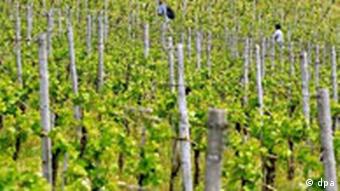 Grapes need a long time to ripen rather than hot temperatures

An especially warm April led to a much earlier start for the grapes than normal. Each day gives them more time to develop flavor, so that a slower, cooler growth period results in a finer wine. Thus German vintners were able to harvest more and better grapes in 2007.

The bigger and better harvest has also made organic wine a greater topic at ProWein this year. In line with the boom in organic food, consumers have also taken an interest in organic wine, and the industry has responded.

Long considered a recipe for mediocrity, the organic certificate has now become sign of quality, with vintners employing the techniques used to produce organic wines regardless of whether they have the certification or not. However, the amount of certified organic wine still makes up only around 3 percent of Germany's total wine production, leaving plenty of opportunity for French and Italian vintners to satisfy the growing demand.

But that could change.

Wake Up to Music and Sample New Wine On the Moselle

We asked readers who've traveled to Germany about their experiences and they shared some tips about their favorite destinations. Have you been to Germany too? Click on the link below to tell us about your trip. (23.02.2008)

Following a long-running debate about the future of Europe's wine industry, the European Union agreed to major structural reforms aimed at curtailing overproduction and generous subsidies. (20.12.2007)

Festivals in Germany for Wine Enthusiasts

Germany's wine regions cater to tourists especially during the summer and autumn. Their numerous festivals offer the opportunity to taste local wines and food along with local entertainment. (02.09.2007)

What do you think of German wine? Can it compete with French, Italian and Californian wines? Send us an e-mail. Please include your name and country in your reply.