The 2009 Nobel literature prize winner Herta Mueller told an audience in Stockholm that growing up under the repressive dictatorship in Romania had inspired her to write. 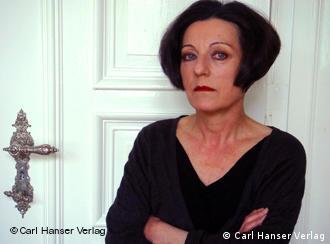 German author and winner of the 2009 Nobel Prize in Literature Herta Mueller delivered the traditional Nobel Lecture in Literature at the Swedish Academy in Stockholm on Monday, where she spoke of the hardship living under dictatorship in her native Romania.

The 56-year-old writer recalled how Nicolae Ceausescu's officials had threatened to kill her if she did not agree to be an informant for the secret police. The fear of death, she said, gave her "a thirst for life, a hunger for words."

"Nothing but the whirl of words could grasp my condition," said Mueller, who was born in 1953 in the German-speaking region of Romania.

"I said (...) to myself, if I sign that, I won't be able to live with myself anymore and I'll have to do it by myself," she said, inferring that collaborating with the secret police meant suicide.

The power of the pen

The Nobel laureate said she took to the pen to express what she could not say aloud - but her works were denied publication due to her open criticism of the government. Instead, she smuggled her early writings into Germany to have them published.

"What can't be said can be written, because writing is a silent act, a labor from the head to the hand," she said. Mueller fled communist Romania for West Berlin in 1987.

"I talked a great deal during the dictatorship, mostly because I decided not to blow the trumpet. Usually my talking led to excruciating consequences. But the writing began in silence, there on the stairs, where I had to come to terms with more than could be said. What was happening could no longer be expressed in speech," she continued.

Mueller also paid tribute to those who live under authoritarian rule today: "I wish I could utter a sentence for all those whom dictatorships deprive of dignity every day, up to and including the present."

Mueller has been praised by the Nobel Prize jury for "the concentration of poetry and the frankness of prose." She, along with other Nobel Prize recipients, will officially receive the award on Thursday at a ceremony in Stockholm.