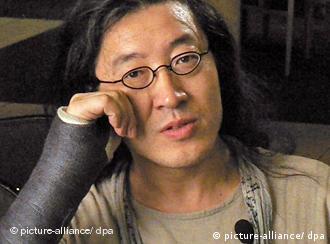 Bei Ling lives in exile in the United States

In September, the poet and essayist Bei Ling was involved in a political scuffle over the China and the World Symposium that took place ahead of the Frankfurt Book Fair this week. Initially invited as an official guest of the book fair organizers, Bei Ling then found himself officially disinvited after the Chinese delegation objected to his inclusion in the program.

Bei Ling was arrested and imprisoned in Beijing in 2000, following the launch of "Tendency," his independent literary journal. He credits his release from prison to the personal intervention of American academic Susan Sontag and Nobel Prize-winning Irish poet Seamus Heaney.

Deutsche Welle: Do you think the Frankfurt Book Fair has been a good thing for freedom of expression and freedom of the press?

Bei Ling: Every year at the book fair they have to represent freedom of expression, freedom of the press and freedom of publishing because this is the tradition. That means this year they can't just say, "Oh, because China is the guest of honor we have to stop this topic." This book fair is a good thing for Chinese publishers, but I'm not sure it's a good thing for the Chinese people. There's no debate.

You are living in exile. Why is that?

I published my literary journal in Beijing. The Beijing police department said that I was an illegal publisher, because in China all publications - including magazines and books - have to be published by official publishing houses or magazines.

What was it that you were writing about in your journal?

Our journal was a world literature magazine. We included lots of international writers. In this issue we especially talked about Seamus Heaney. Seamus Heaney is my favorite poet and also my good friend. We did an interview with him. Also, we included some essays and some underground literary work from China.

It's a very difficult time. I don't have enough energy. Firstly, you have to try to survive. You are living in a foreign language. This is why I chose to live in Taiwan half of the time - it's nearer to my own language. If you are not able to be near - to touch Chinese books - you can loose your sensitivity towards your own language.

The good thing is that if you are a bit further away, you have a clearer mind and more time to think. Also, it's easier to know what's going on with world literature. For instance, I heard that Herta Mueller won the Nobel Prize for Literature. She's coming to the book fair - I really want to meet her!

Do you think you'll go back to China?

I always think if I can go back it will be good. I want to see my family and see Beijing, where I'm from. I need to find a publisher in Germany. I want the German readers to know my work, not just my name.

Bookworms are rare in the land of Goethe and Schiller

Germans are known around the world for being cultured, but not everyone in the country is necessarily a reader. A quarter of the population never picks up a book. (15.10.2009)

Germany and China meet at the Frankfurt Book Fair

The Frankfurt Book Fair opens after a month of controversy over who is running the show - the German organizers or the Chinese delegation, this year's guest of honor. But will diplomatic relations be affected? (14.10.2009)