Iraqi security forces have battled with al Qaeda-linked militants who seized control of Sunni-majority cities this week. The fighting erupted after a Sunni lawmaker was arrested and a protest camp dismantled. 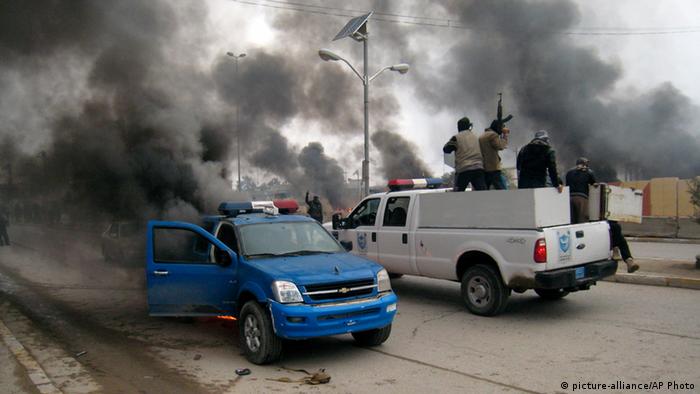 Iraqi government forces were joined by allied tribal forces on Thursday as they fought to regain control of parts of cities seized by the militants, reported to belong to an al Qaeda-linked group, the Islamic State in Iraq and Levant, earlier in the week.

This came a day after a series of attacks by the militants, in which they reportedly took control of a number of police stations and military posts across several cities in Iraq's western Anbar province.

Thursday's worst fighting came in the city of Fallujah, according to the Iraqi armed forces.

Police said fighting had also broken out in the provincial capital, Ramadi. There was no immediate word on casualties.

On Monday, government forces moved in to dismantle a Sunni protest camp in Ramadi, triggering clashes with the militants.

At one stage, Prime Minister Nouri al-Maliki ordered the military to pull back from Anbar to allow local police to handle security, something that Sunni politicians had demanded. However, after the militants attacked several cities in the province, the prime minister ordered military reinforcements back in.

Also on Thursday, at least 16 people were killed after a suicide bomber detonated a car packed with explosives near automobile showrooms in the town of Balad Ruz, around 50 kilometers (31 miles) southeast of Baquba. More than 20 others were wounded in the attack, according to local officials.

More than 8,800 people were killed in Iraq in 2013, according to United Nations estimates, making it the deadliest 12 months the country has experienced in five years.