A large group of Iraqi parliamentarians have resigned. The decision followed a police sweep of a protest camp west of Baghdad. 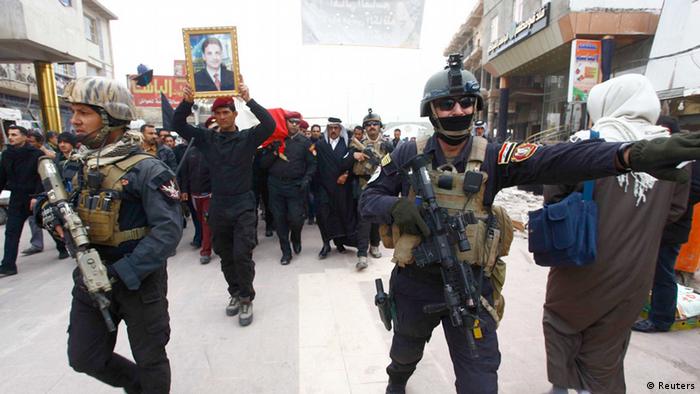 During a televised news conference on Monday, more than 40 Iraqi Members of Parliament announced their immediate resignation, citing rising tensions between security forces and the country's Sunni Muslim minority.

The parliamentarians demanded "the withdrawal of the army…and the release of MP Ahmed al-Alwani," referring to a Sunni lawmaker whom police apprehended over the weekend, according to the news agency AFP. Al-Alwani's brother and five of his bodyguards died in the subsequent shootout with police.

The announcement of the mass resignation came shortly after police had torn down a protest camp near Ramadi, which lies roughly 130 kilometers (80 miles) west of the capital city Baghdad. The camp lay on the highway which runs between the two cities and links Ramadi to Jordan.

The demonstrators had been holding a sit-in for more than a year against the Shiite-led government's alleged discriminatory policies against the country's Sunni population.

The sit-in participants had agreed to end their months-long protest action before police dismantled the site, according to the Associated Press news agency which cited Defense Ministry spokesperson Mohammed al-Askari speaking to Iraqi state television.

Al-Askari credited successful three-day talks between the protesters and the Defense Ministry with ending the sit-in.

Meanwhile, 10 people were killed in clashes nearby on Monday. Gunmen were reportedly among the dead. It was not immediately clear if the sweep of the camp had sparked the fighting.

Violence has surged in Iraq over the past year, returning to levels last seen during 2006 and 2007 when the country stood on the brink of civil war. According to United Nations estimates, more than 6,000 civilians have been killed since December 2012.

The US government is concerned about al Qaeda gaining strength in Iraq. Now, Washington is sending missiles and drones to help Baghdad in the fight against the terror organization. (28.12.2013)