Heading for the G8 summit - with your Sherpa

They prepare for the G8 summit, bargaining and fighting for their bosses. Because they carry the weight of the summit's work, they're called "Sherpas," like those most famous of Himalayan baggage bearers. When on Monday (17.06.2013) the heads of state and government of the world's eight leading industrialized countries meet for their yearly summit - this time in the Lough Erne resort near Enniskillen in Northern Ireland - everything is ready to go. The closing statements have already been prepared, to nearly the last detail - only a few points about global economics and foreign policy end up being discussed.

Even these bracketed passages of the draft's closing statement end up getting removed over the course of two days. The Sherpas - or subnegotiators of the eight chiefs - could occupy themselves with this task for an entire night, as was the case at last year's summit at Camp David in the United States.

Over several sessions, the eight Sherpas and their special working groups, including "sous-Sherpas," have over the last months already processed topics that were specified by the British G8 presidency. 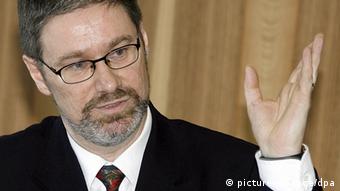 Economics professor Röller carves out the path to the summit

German Chancellor Angela Merkel counts on Lars-Hendrik Röller to shoulder her burdens. For the past two years, the economist and computer scientist has been Merkel's right-hand man for the G8, and also the G20 - in which developing countries take part.

The rather reserved Röller got into politics through the back door, so to speak, from a private business school. The 54-year-old now directs the economics and finance department for the chancellery, and as such has a direct line to the chancellor.

And Merkel is the one who sets the broad strokes for the negotiations. Sherpas hardly ever make public appearances. Their commenting to the media is frowned upon. This is one reason why DW's sources for this story preferred to remain anonymous.

Secretiveness, discretion and a certain esprit de corps are all part of the Sherpas' role. They bargain hard with each other, becoming close over the course of - often informal - negotiation rounds. The Sherpas who negotiate over economic matters are often tougher than their bosses.

"In the end, there should remain at least a bit of space for compromise during the actual summit," said a diplomat familiar with the customs of the G8. "Each has her or his national interests and pet issue," the diplomat told DW.

British Prime Minister David Cameron, who is heading up this year's meeting, has placed an emphasis on trade, transparency and tax havens. At this point, it's not clear what Russia might place on the agenda next year, or Germany in the year after that. 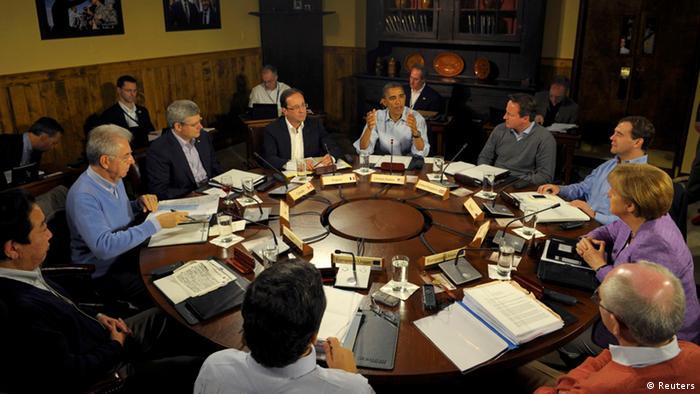 The G8 Summit at Camp David 2012: Sherpas sit directly behind their leaders

At the summit, taking place at a luxury hotel in Northern Ireland, the Sherpas sit in a row behind their bosses. Röller comes armed with a healthy plug of papers, and if needed, could whisper a few key facts into the chancellor's ear.

U.S. President Barack Obama raved that he can depend on his Sherpa Michael Froman 100 percent. At the beginning of May, Obama promoted Froman to the position of U.S. trade representative.

"We went to law school together - he was much smarter than me then, he continues to be smarter than me now. And over the past four years, he has been my point person at global forums like the G8 and the G20," Obama stated. "He's really been the driving force oftentimes in organizing these incredible, international summits in which huge amounts of business get done."

But not all the burden bearers get along well with their bosses. The Canadian Sherpa, for example, was replaced just before the summit. The Japanese Sherpa is located in the foreign ministry, far from the prime minister.

In Germany, it's a good move to become summit preparer: Röller's predecessor made quite a career for himself. The president of the German Central Bank, Jens Weidmann, was formerly Merkel's Sherpa. Jörg Asmussen, currently on the board of directors of the European Central Bank, was a G20 Sherpa. And the former German President Horst Köhler was a G8 Sherpa for former German Chancellor Helmut Kohl.

The list goes on. "Powerful people tend to keep in mind the names of those who have worked as Sherpas," one insider said.

From the living room to the amusement park 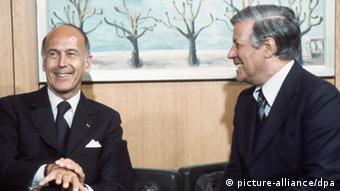 The Group of Eight is a traveling circus. It has no fixed administration or staff. A different country takes the helm each year, which includes organizing the summitand that means the Sherpas have work to do.

The informal meeting was founded in 1975 by then-president of France Valery Giscard d'Estaing and the German chancellor at the time Helmut Schmidt in order for the US, Great Britain, Italy and Japan to discuss economic matters. Canada joined in 1976, and after the fall of the Iron Curtain, Russia was invited in 1998. And so, the Group of Eight was formed.

Schmidt recalled that the early meetings were simple affairs, free from the great to-do of the recent summits. He criticized the G8 summits of today for transforming themselves into major media events.

Political scientists and German G8 expert Hanns Maull pointed out that the Group of 20 - which includes China, India and Brazil - has become more significant, especially after the financial crisis. "The question is whether or not the G8 should be replaced by the G20," Maull told DW.

But such international institutions have a certain staying power, Maull added. The exclusive club, including several generations of Sherpas, has been meeting for nearly 40 years now.

The G8 exists mostly to establish the line for the large industrial countries, before they go to the G20 summit, word has it in Sherpa circles. And this makes the G8 indispensable, as well. It's the only forum where the heads of state and government can fight with each other, beyond the public eye and sometimes carrying all of the burden themselves.

Even if G8 nations agree to a British proposal to stop paying for the release of kidnapping victims, other groups will likely keep forking out ransoms to protect staff, security expert, Hans-Georg Ehrhart, tells DW. (15.06.2013)

The US and UK are still counting on talks rather than military action to solve the civil war in Syria. But their talks in Washington highlighted the diminishing influence of the US-British alliance on the global stage. (14.05.2013)

G8 foreign ministers struggled in vain to agree on a united approach to the bloody conflict in Syria. The talks in London did, however, achieve consensus regarding the situation on the Korean peninsula. (11.04.2013)