Hans Küng, a respected scholar of theology and philosophy, likens Pope Benedict XVI in some ways to US President George Bush. He says both need to come down from the sky and take a look at the reality on the ground. 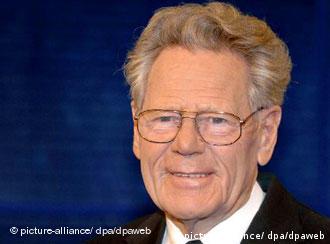 Küng is the president of the Foundation for Global Ethics

DW-WORLD.DE: What did you think of Pope Benedict's visit?

Hans Küng: I think many people here in Germany have an ambivalent impression. Benedict has a very nice personality; he's shown himself as a very friendly person. He's also not a media pope like his predecessor. He's not an actor who is looking for applause.

He concentrates on the central truths of Christianity and faith in God. On the other hand, he didn't accomplish any of the reforms to the Catholic Church that some people were looking for. 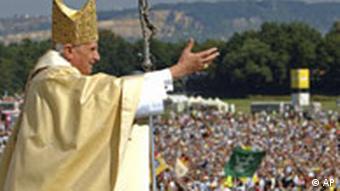 Küng compared the Pope to another leader, George W. Bush

There are a great many things. If you take the situation around Munich, a lot of parishes are without priests. And just having a lot of people in the seats doesn't mean that they are all believers.

Of course everybody finds it a very stimulating event to see the pope up close and lots of people are looking for a spiritual father and a more credible representative of moral integrity, justice and peace than many politicians today.

But there were fewer people at the liturgy than had been expected. We should not think that all those who were coming to see a star are now convinced and faithful Catholic believers.

Why don't you think that the great wave of enthusiasm that greeted the pope could have a vitalizing effect on the church?

It would be great if it had consistent consequences. It is not enough to preach and have a big event. The most recent public opinion poll by McKinsey asked whether the Catholic Church should be reformed and 43 percent said yes. This is 40 percent more than before.

In the same poll, 45 percent -- nearly half of all Germans -- said they have no confidence in the Catholic Church as an institution.

The people in Munich were very happy -- they have a German pope, a Bavarian pope. It the event had been held in Magdeburg, in a new German state, where only 8 percent are registered as Christians, we would have had a different image of Germany.

What do you think about the pope's comments on the unity of the church? Do you think he could influence more cooperation between the Catholics and the Protestants?

Of course he could. I was very pleased that the German president, Horst Köhler, who is a member of the Global Ethic Foundation, said when the pope arrived: "in the name of many Christians in this country, more ecumenical progress." And the pope answered in a very convincing way. He said he would do everything to bring Catholic and Protestants together. 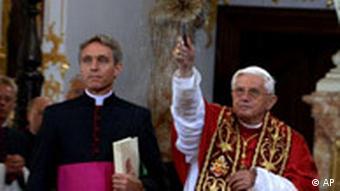 Afterwards, when he met with other Christians all the controversial issues between Catholics and Protestants were just ignored. Most people here in Germany would have to have a common Eucharist, the acknowledgement of the ministers of the Protestant churches. They would have a solution for marriages from different churches, and of course the problem of papal jurisdiction and infallibility. All this was practically ignored. Even the representatives of the Protestant churches didn't have the courage to mention it.

Do you feel that the changes you've mentioned, including unity among Christians, will be possible during the tenure of the current pope?

I had a long conversation with him, which I'm very grateful for. I still hope that he will finally see that he cannot only talk -- he must finally take some action. And I still hope that, after a certain time of reflection, he will do something.

Sometimes I have the impression he's like President Bush, who takes his Air Force One jet and flies over New Orleans just to see how the situation is. But finally he had to come down to the ground to see what the reality is.

The diocese in Regensburg, where the pope was, is probably the most divided diocese in Germany. The bishop of Regensburg replaced practically all the elected members of the diocesan council in an authoritarian way with like-minded people. And people could not understand why the pope just made comments about the organ in the Regensburg church in the presence of this bishop.

Hans Küng was professor of ecumenical theology and director of the Institute for Ecumenical Research at the University of Tübingen from 1960 until his retirement in 1996. He also served as official theological consultant to the Second Vatican Council appointed by Pope John XXIII. Küng has published numerous books on Christianity, the Catholic Church and ethics.

Pope Benedict XVI winds up his nostalgic visit to his native Bavaria on Thursday with a visit to the cathedral in the city of Freising where he was ordained to the priesthood in 1951. (Sept. 14, 2006)

Hans Küng was a strong voice for peace — and was lauded not only by Catholics, but by many others as well. The theologian passed away in Tübingen, Germany, at the age of 93.

German Cardinal Reinhard Marx has said he is still willing to step down in response to a damning report on decades of sexual abuse in his archdiocese. But for now, he said he wanted to focus on necessary reforms.