Commercial operator SpaceX has launched a cargo capsule bound for the International Space Station (ISS). But its first attempt to reuse its Falcon launch rocket by landing it on an ocean barge has failed, narrowly. 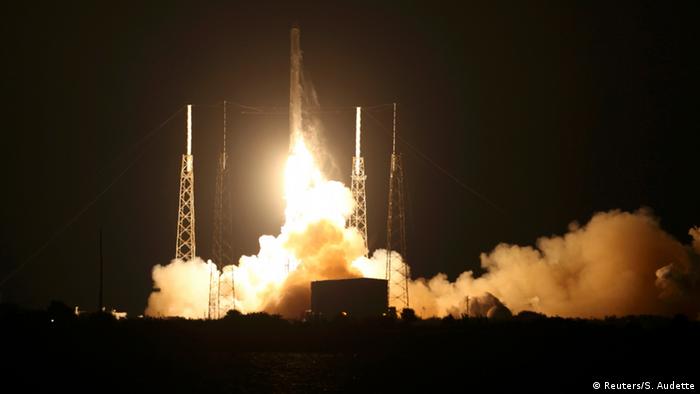 The Falcon rocket landed too heavily on the barge and broke apart, according to SpaceX founder Elon Musk, while the unmanned Dragon cargo capsule went into orbit.

The capsule is due to reach the ISS on Monday to deliver nearly more than two tons of supplies to its crew of six.

The Falcon booster, once expended of its launch fuel, was supposed to make a controlled descent to Earth and land softly upright on the barge located some 300 kilometers (200 miles) off Florida.

Musk said the attempt boded well for the future though and was "close."

"Rocket made it to drone spaceport ship but landed hard," he wrote on Twitter, adding "no cigar this time," so that the 14-story rocket could be reused unscathed for future launches.

During previous attempts to recover a Falcon booster, the rocket either sank in the ocean or exploded.

He recently told the New York Times that the re-use method could cut launch costs to by some 99 percent.

The cargo bound for ISS includes 18 student spaceflight experiments, which were hurriedly reconstructed.

A previous delivery to ISS was destroyed in October when a rocket built by rival contractor Orbital Sciences exploded on lift-off.

The two companies are contracted by the US agency NASA to sustain deliveries to the orbiting ISS which is a project involving 15 nations and Europe's agency ESA.

NASA has generally had to rely on Russia's Soyuz capsules to ferry astronauts to the ISS since retiring its aging shuttle fleet in 2011.

Last month, the agency successfully tests a version of its next-generation, long-distance Orion spaceship on a short flight.

On board ISS is a crew of three Russians, two Americans and an Italian.

NASA's Antares rocket that was headed for the International Space Station (ISS) has exploded on launch. There were no initial reports that anyone had been hurt, with damage limited to the launch facility. (28.10.2014)