Hamburg reaches out to its Muslim communities

Hamburg has become the first German state to sign formal agreements with its Muslim communities, recognizing Muslim holidays and improving religious tuition in schools. Other states are expected to follow suit. 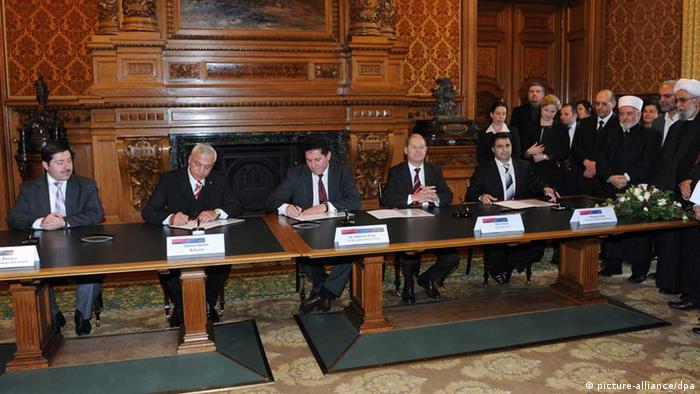 The mayor of the city-state Olaf Scholz described the signing ceremony in Hamburg's City Hall as a "milestone" as he and representatives of diverse Muslim associations added their signatures.

"With the signing of these agreements, we are strengthening the societal foundation of our city: we are all Hamburg," said Scholz, who is a former federal labor minister of the opposition Social Democrats (SPD).

Hamburg's agreements were made with the city's Alevi community and three Muslim organizations: the Turkish-Islamic union (DITIB), the council of Islamic communities (Shura) and the Federation of Islamic Cultural Centers (VIKZ). Alevis are a liberal Islamic religious community, based largely in Turkey.

Zekeriya Altug, chairman of the Hamburg association of the DITIB, called it "a historic day for Hamburg, but also for Germany."

The agreements still await final approval by Hamburg's civic parliament, in which Scholz's center-left Social Democrats hold a majority. Mayor Scholz said he hoped for a "broad consensus." The opposition Christian Democrats and Greens have already welcomed the accords.

Hamburg's Protestant bishop Kirstin Fehrs said Hamburg was open to the world and tolerant. Its Catholic bishop Hans-Jochn Jaschke said it was important that the various religions assist one another and communicate together.

The agreements recognizes Muslim and Alevi religious holidays and include provisions for the construction of mosques, upkeep of cultural facilties, rites of burial without coffins and the counseling of patients and prison inmates by Muslem clerics.

Many migrants in Germany complain of pervasive discrimination. Black and Middle-Eastern men are more likely to be denied entry to clubs, a recent test indicated. But is it necessarily a black and white issue? (09.10.2012)

A court in Germany has told the police they may not carry out identity checks on people on the basis of their skin color. There's disagreement among the police as to whether they welcome the ruling. (31.10.2012)

Hamburg's Muslims and Alevis will be granted unpaid leave by their employers for three religious holidays per year, just as their Christian counterparts can. On such holidays, school students can also be exempted from lessons.

The deal does not bring any major legal change, though. Muslim pupils were already given days off for major holidays, and workers will still have to use their vacation time or make the day up at a later date to receive religious leave.

The agreements do not grant the substantial financial support enjoyed by mainstream Protestant and Catholic churches, which under Germany's constitution are designated as statutory corporations that can collect special taxes imposed by the state.

Around 130,000 Muslims and 50,000 Alevis live in Hamburg, according to official figures. Similar agreements with the Protestant and Catholic churches were signed in 2005. An accord with its Jewish community followed two years later.

First presented to the public in August, similar measures have picked up steam around the country. The northwest state of Bremen looks set to pass its own measure, with Mayor Jens Börhnsen saying "´citizens of Islamic religions form a meaningful part of the Bremen population."