Hamas-led Parliament Rejects Negotiations with Israel | News and current affairs from Germany and around the world | DW | 18.02.2006

Hamas leaders distanced themselves from calls by Palestinian Authority president Mahmud Abbas for a negotiated settlement to the conflict with Israel while stressing that differences would be resolved through dialogue. 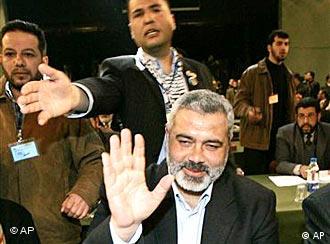 In a speech to inaugurate the new Hamas-dominated legislative council on Saturday, Abbas said he would continue to strive towards reaching an agreement with Israel, despite last month's landslide general election win for the radical Islamists.

Hamas in contrast refused to recognize the Jewish state's right to exist and rejected the renouncement of violence. The militant Islamist group has claimed responsibility for dozens of suicide attacks in the last five years.

Despite the marked differences with the president of the Palestinian Authority, the man expected to be named as his new prime minister stressed that he wanted to work constructively with Abbas.

"The speech by president Abbas included some positive points but we do have differences about the political part of his speech, as he has his program and we have ours," Ismail Haniya, who was Hamas's chief candidate in the January 25 election, told AFP.

"These differences about our positions and political program will be resolved by dialogue and through coordination, in the interests of the Palestinian people," added the man most likely to be elected prime minister.

Haniya and other Hamas Members of Parliament had to watch proceedings via videolink rather than in person at the Ramallah-based parliament as Israel refused to issue travel permits to the West Bank for members of an organization it considers terrorist.

Mahmud al-Zahar, Hamas's overall leader in Gaza who was the target of an Israeli assassination attempt two years ago, said that Abbas's approach was unrealistic, but pledged to cooperate with him.

"He sees the Israeli side as a partner whereas Israel says it has no partner with the Palestinians. As a result I don't think that the position expressed by (Abbas) can be applied."

Zahar, who is expected to head Hamas's faction in the 132-seat parliament, added that the previously signed agreements Abbas mentioned "have no chance of being applied because the Israeli enemy does not respect them."

Israel for its part has said it now regards the Palestinian Authority as its "enemy." A senior ranking Israeli government official said Saturday that the newly sworn in parliament had done everything possible to make itself an enemy of Israeli.

Speaking on condition of anonymity, he said if Hamas does not renounce violence, recognize Israel's right to exist and commit itself to previously signed agreements, there is "no relationship and they will have defined themselves as a hostile enemy."

During his speech to the deputies, Abbas said that the Palestinians must respect international agreements such as the 1993 Oslo accords that paved the way for the creation of the Palestinian Authority.

Abbas also remains committed to the 2003 roadmap peace plan which targets the creation of a Palestinian state alongside a secure Israel. The plan is backed by the United States, European Union and Russia, but has achieved little progress.

EU, US Face Possible Hamas-Iran Alliance if Aid is Cut

The European Union and the United States could be pushing Hamas into the welcoming arms of Iran if they decide to carry out threats to cut aid to the Palestinian Authority. (Feb. 17, 2006)

Europe Gets in Step With US Policies in the Middle East

In 2003, most European nations were at odds with the US over its invasion plans for Iraq. Now, with a new set of challenges in the Middle East, Europe is increasingly aligned with Washington on the Hamas and Iran issues. (Feb. 18, 2006)