Steinmeier Defends EU Stance on Hamas | Germany| News and in-depth reporting from Berlin and beyond | DW | 14.02.2006 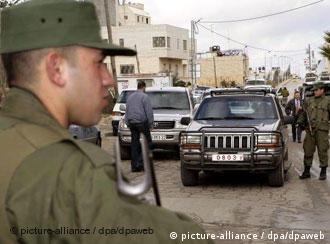 Security was high in Ramallah during Steinmeier's visit

In Ramallah on the last-day of his Middle East tour, Steinmeier met with Palestinian Authority President Mahmud Abbas but refused to talk with the radical Islamist movement Hamas, the landslide winners of last month's general election in the West Bank and Gaza Strip.

During talks with Israeli leaders in Jerusalem on Monday, Steinmeier said that Berlin had no intention of following Russia's lead and negotiating with Hamas. Seen in Europe as a terrorist organization, Hamas is now poised to form a government after the new Palestinian parliament is inaugurated on Saturday. 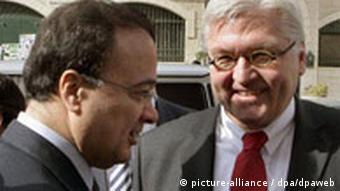 Nonetheless, Steinmeier told his Palestinian counterpart Nasser al-Qidwa that the EU would continue its financial support of the Palestinian territories for the time being, at least until the new government takes office. The 25-member bloc is the biggest source of income for the cash-strapped and corruption-ridden Palestinian Authority.

"Aid from Germany, the European Union and other donor countries must continue to finance infrastructure projects in all fields," Erakat said in a statement from his office.

At his meeting with Abbas, Steinmeier reaffirmed Germany's preconditions for cooperating with a Hamas-led Palestinian government.

"We can only work with a government made up of political forces that renounce violence, recognize Israel's right to exist and accept all previous agreements between Israel and the Palestinian Territories," he stated.

The top German diplomat later traveled to neighboring Jordan to meet King Abdullah II. On Tuesday evening he is due to leave for Ankara, where he will try and calm tensions between Europe and the Muslim world in the wake of caricatures of the Prophet Mohammed being published in European newspapers.

On a trip to the Middle East, Germany's foreign minister said Hamas should be shunned unless it renounces violence and recognizes Israel. He made the remarks after talks on Monday with the acting Israeli prime minister. (Feb. 13, 2006)

EU to Continue Aid to Palestinians

EU officials said Friday that they had no plans to halt aid to Palestinians despite threats by gunmen to the bloc's headquarters in Gaza. European parliamentarians have also voted to keep aid going. (Feb. 3, 2006)