A UN court has jailed six Bosnian Croats for up to 25 years after finding them guilty of war crimes. It also condemned late Croatian premier Franjo Tudjman, in a ruling the current prime minister described as simplistic. 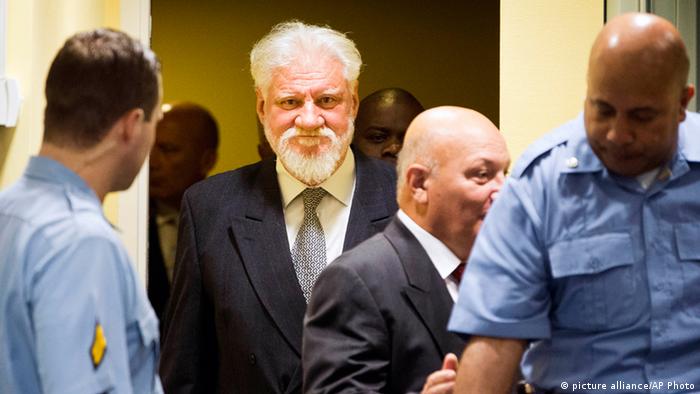 Judges at the International Criminal Tribunal for the former Yugoslavia (ICTY), in The Hague, on Wednesday found the six defendants guilty of persecuting, expelling and murdering Muslims between 1991 and 1994.

A majority of the three-judge panel also named late Croatian President Franjo Tudjman among a group of top-ranking Zagreb officials as contributors to a process of ethnic cleansing of Muslims during the Bosnian conflict.

Former Bosnian Croat leader Jadranko Prlic and his five co-defendants were jailed for between 10 and 25 years for their part in the murder, rape, persecution, expulsion and maltreatment of Muslims in a bid to create a "greater Croatian state.”

The 53-year-old Prlic and three others were found guilty on 22 separate counts by the court, while two of the defendants were acquitted on some of the charges.

"The trial chamber is satisfied that Jadranko Prlic made a significant contribution to a joint criminal enterprise and to a criminal purpose to drive out the Muslim population," French judge Jean-Claude Antonetti told the court.

"The trial chamber therefore sentences you to 25 years in prison," Antonetti told Prlic, who received the longest sentence. The other defendants convicted, all high-ranking political and military leaders, were Bruno Stojic, Slobodan Praljak, Milivoj Petkovic, Valentin Coric and Berislav Pusic.

The three main ethnic groups in Bosnia - Muslims, Serbs and Croats - fought each other in the wake of Bosnia's split from the Yugoslavian federation in 1992.

Prime Minister Zoran Milanovic said the judgment about Croatia's role did not correspond to reality and said he hoped it would be overturned.

"Reality is sometimes complicated, but sometimes it is very simple," he said. "Croatia made some mistakes in Bosnia, but it was also a partner and helped a lot."

"We cannot be indifferent to what the verdicts say but we hope the appeals chamber will accept what we feel is right," he said, without elaborating.

The former premier Tudjman, who died in 1999, led Croatia's drive for independence and is regarded by many as the father of the nation.