The Hague has sentenced two Bosnian Serbs to 22 years for their campaign to cleanse the country of Muslims and Croats in the 1992-95 Bosnian war. The trial of the two war criminals dates back to 2008. 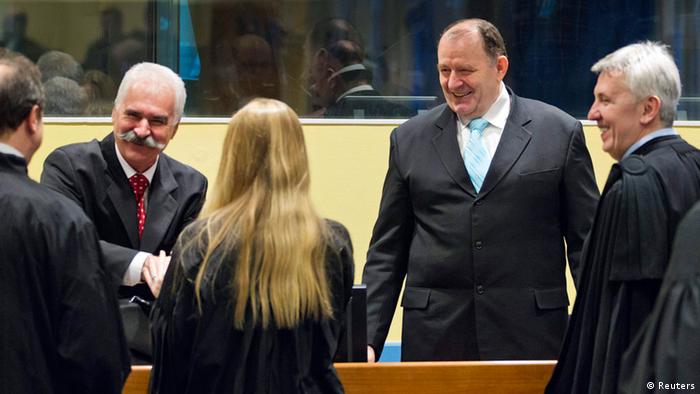 Mico Stanisic, 58, and Stojan Zupljanin, 61, were convicted on Wednesday of crimes against humanity including murder, torture and cruel treatment of non-Serbs in municipalities and detention centers.

They are also known for their association with the former Bosnian Serb leader Radovan Karadzic, who himself faces charges before the tribunal, including genocide for masterminding ethnic cleansing in Bosnia after the breakup of the former Yugoslavia in 1991.

"Many detainees were killed or died as a consequence of the mistreatment," the judges said in their verdict. "Across municipalities, thousands of non-Serbs were either killed or forcibly displaced from their homes."

The judges ruled that the men had endeavored to cleanse non-Serbs through a "widespread and systematic campaign of terror and violence." Stanisic turned himself in in 2005 and was allowed to remain free until the trial. Zupljanin was arrested in 2008 in Serbia after nine years on the run and was held until the trial as a flight risk.

Sarajevo, the capital of Bosnia-Herzegovina, was torn apart by war. Twenty years later, one young architecture student is bringing color back to the city through murals painted with the help of local schoolchildren. (21.02.2013)

Among the atrocities was 1992's Prijedor massacre, which led to the death or disappearance of more than 5,000 Muslims and Croats. Non-Serbs were taken to improvised detention camps, including a particularly notorious one at Omarska where detainees were raped and killed. Those imprisoned were held in "deplorably inhumane" conditions, according to the court.

"The chamber finds that the goal of these actions was the establishment of a Serb state as ethnically pure as possible," presiding Judge Burton Hall said.

Their trials - in which prosecutors had asked for a life sentence - were joined in September 2008 and took 354 days of hearings with the evidence of 199 witnesses admitted, according to the International Criminal Tribunal for the former Yugoslavia. Bosnia's war left 100,000 people dead and some 2.2 million homeless.