"Islamic State" militants have stormed a state-run broadcaster in the eastern Afghan city of Jalalabad. Gunfire and blasts were heard while journalists are reportedly trapped inside the building. 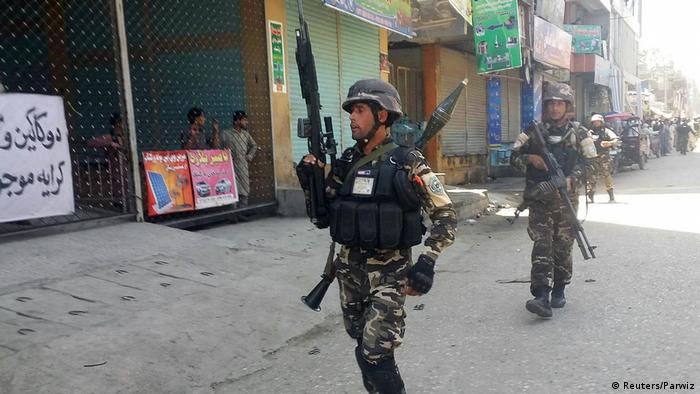 Gunmen from the self-styled "Islamic State" (IS) attacked a national television and radio station in the eastern Afghan city of Jalalabad on Wednesday, engaging in a firefight with security forces, police confirmed.

The ongoing clashes have killed at least two people and wounded another 14, officials said. A health worker told news agency AFP that many of people who arrived at the hospital sustained gunshot wounds.

"Four attackers entered the RTA (Radio Television Afghanistan) building this morning. Two blew themselves up and two others are still resisting," government spokesman Attaullah Khogyani told AFP. Earlier, he said there had been three attackers.

Explosions and heavy gunfire could be heard around the RTA building, located close to the provincial governor's compound.

An RTA photographer told AFP that he fled the building shortly after the gunfight broke out but added that some of his colleagues were still stuck inside.

The attack began with an explosion, followed by a gun battle with security forces, Interior Ministry spokesman Najib Danish confirmed.

Later on Wednesday, IS claimed responsibility for the attack in Jalalabad, which is the capital of Nangarhar province.

"Islamic State fighters are currently carrying out an attack inside the state broadcasting building in the city of Jalalabad," the movement's AMAQ news agency said in a statement on instant messaging service Telegram.

Nangarhar is known to contain both IS militants and the Taliban. Last month, the US military dropped a massive bomb on IS positions in the province, killing dozens of the extremist group's fighters.

The Taliban have also increased their attacks since announcing their spring offensive last month.