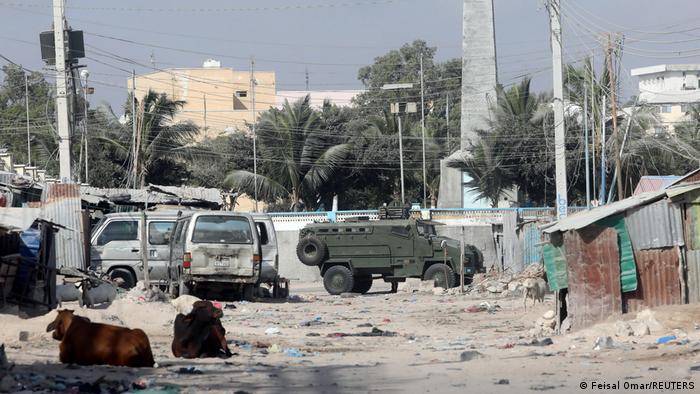 Routes were sealed off and heavy security, including armored personnel carriers, deployed ahead of the protest

Months of political tensions over the holding of elections in the fragile Horn of Africa nation have burst into the open, prompting the United Nations to call for "calm and restraint."

What happened in Mogadishu?

Friday's unrest came as the opposition tried to march against a delay to elections, witnesses said.

While it was unclear who opened fire first, witness Yusuf Mohamed told the AFP news agency there had been a "heavy exchange of gunfire" between security forces and armed guards protecting the opposition supporters.

There was also confirmation that an explosive projectile thought to be a rocket had hit an area hosting shops and restaurants at the city's airport.

Roads had been sealed off and heavy security deployed ahead of the planned protest.

Hours early, two militiamen were killed in a nighttime confrontation with soldiers loyal to the government.

Somali Information Minister Osman Dubbe said "armed militia" had attacked a military post in the city, but that it was fended off.

However, former Somali president Sharif Sheikh Ahmed said government had raided a hotel near the presidential palace where he and another former president, Hassan Sheikh Mohamud, had been staying in advance of the protest. They reportedly accused the government of an assassination attempt.

After the violence, armored military vehicles cordoned off the area in front of the presidential palace.

Why is the opposition protesting?

The violence comes after weeks of tensions about the holding of elections. It's feared that the fighting could split Somalia's military along clan lines and boost the insurgency of Islamist group al-Shabab.

Opposition candidates are calling for President Mohamed Abdullahi Mohamed, whose term expired on February 8, to step down. A deadline for indirect elections was missed as semi-autonomous regions squabbled over how the voting should be conducted.

The president, better known as Farmajo, was set to hold a meeting with regional leaders on Friday in a bid to resolve the impasse.

The Somali government had warned the opposition against the staging of the protest, citing soaring cases of coronavirus.

Police in the capital, Mogadishu, fired at the attacker as he broke through a checkpoint, allowing civilians to escape before the explosion.

The attack took place shortly after negotiators failed to end a stalemate over the selection of a new president. Islamist terror group Al-Shabaab took responsibility for the attack near the town of Dhusamareeb.