A group of six Gulf Arab states has wrapped up a two-day summit with an appeal to the international community to end the bloodshed in Syria. They also called on Iran to butt out of the affairs of its Arab neighbors. 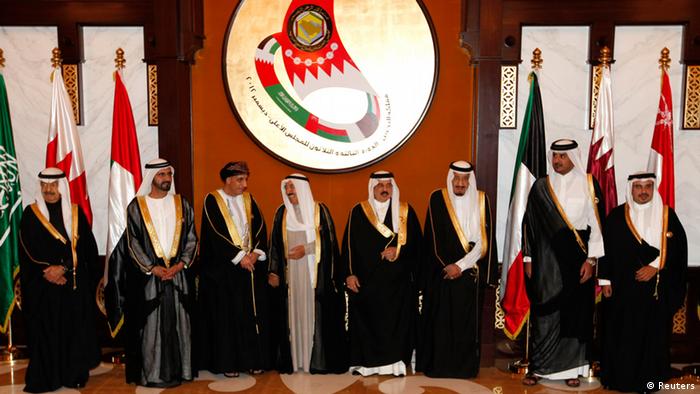 A statement read out by the Gulf Cooperation Council's (GCC) secretary-general called for urgent action in Syria.

"We ask the international community for serious and swift moves to stop these massacres and these severe attacks that contradict all religions and international laws and humanitarian principles," Abdulatif al-Zayani said.

The statement also expressed the Council's support for the efforts of United Nations-Arab League envoy Lakhdar Brahimi to bring peace to the country, saying it hoped this would "help achieve agreement within the [UN] Security Council."

The GCC's position on what Syria's political future should look like is clear, having long since called on President Assad to step down. At a meeting last month, it also recognized a newly formed opposition coalition as the legitimate representative of the Syrian people.

The statement released on Tuesday also criticized Iran for trying to meddle in the domestic matters of sovereign nations in the region.

"The Council expressed its rejection and condemnation of the continuing Iranian interference in the affairs of the Gulf Cooperation Council's states and called on Iran to stop these policies," it said.

The communique, though, did not say exactly what the Gulf states accuse Tehran of actually doing. However, much of their discontent appears to relate to Bahrain, which hosted the two days of talks in its capital, Manama.

"Politically, [there is] lots of meddling in the affairs of GCC states; an environmental threat to our region from the technology used inside nuclear facilities; and there is of course the looming nuclear program," Khalid Bin Ahmed Bin Mohammed Al Khalifa said.

Bahrain has in the past accused Iran of stirring up unrest in the country, which resulted in pro-democracy protests led mainly by the country's Shiite Muslim majority last year. The country's Sunni Muslim rulers struggled to contain the demonstration, eventually calling in security forces from Saudi Arabia and the United Arab Emirates to help it do so.

The GCC was established in 1981 with the broad objective of improving cooperation among its member states, which include Bahrain, Kuwait, Oman, Qatar, Saudi Arabia and the United Arab Emirates.

On Tuesday, Brahimi met with Syrian opposition groups tolerated by the Syrian regime.

Hassan Abdel Azim, the head of the National Coordination Committee for Democratic Change, who met with Brahimi, told the news agency DPA the peace envoy is working on a "consensus" between the United States and Russia to end the conflict.

Azim said this should "pave the way for consensus among the major powers in the UN Security Council and other regional powers; thus creating a suitable atmosphere for peaceful transition in Syria."