The judgment is due in a landmark human rights trial in Guatemala. For the first time, a former military dictator in Latin America has been charged with genocide in his own country. 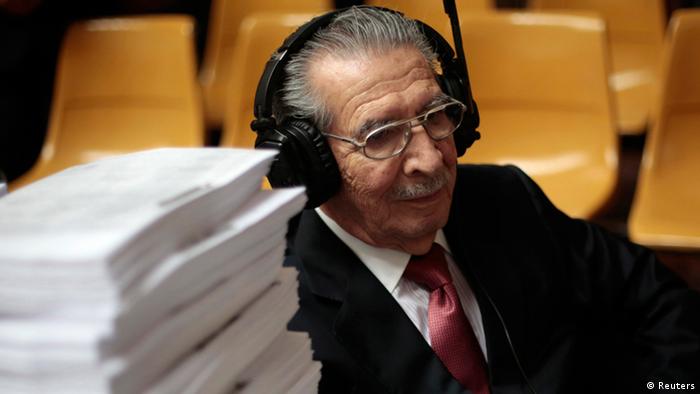 Representatives of indigenous, human rights and student groups, relatives of victims as well as former soldiers were in the court on Thursday to hear former Guatemalan dictator, Efrain Rios Montt, deny the charges against him.

Prosecutors said that while in power, Rios Montt was aware of, and thus responsible for, the killing of at least 1,771 Ixil Mayas in the towns of San Juan Cotzal, San Gaspar Chajul and Santa Maria Nebaj in Guatemala's western highlands.

Speaking for the first time in his trial, 86-year-old Rios Montt said: "I never ordered attacks on a specific race.'' He added: "It was never my intention or my goal to destroy a whole ethnic group."

For the victims, Benjamin Geronimo, president of the Justice and Reconciliation Association, told the tribunal of three judges that he survived massacres and killings that claimed the lives of 256 members of his community. "I saw it with my own eyes, I'm not going to lie. Children, pregnant women and the elderly were killed,'' Geronimo said.

"It is easier for a camel to go through the eye of a needle than for a genocidist to enter the kingdom of God," Geronimo added. Rios Montt was a fundamentalist member of a born-again Christian movement, active in Guatemala at the time of the killings.

The first ever domestic, war crimes trial of an ex-head of state has started in Guatemala. Former army general and dictator Efrain Rios Montt is in court on charges of genocide and crimes against humanity. (19.03.2013)

Rios Montt is being tried together with Jose Rodriguez Sanchez, a 68-year-old former general who was a high-ranking member of the military chiefs of staff during Rios Montt's administration. Rodriguez Sanchez's lawyer denied the charges against him.

Rios Montt seized power in a March 23, 1982, coup, and ruled until he was overthrown just over a year later. In July 1982, he launched a scorched-earth military campaign called "rifles and beans" to undermine support for left-wing, anti-government guerrillas.

Officers wrote that the guerrillas had succeeded in indoctrinating the impoverished Ixil Maya communities. In the military campaign, more than 600 Indian villages in the Guatemalan highlands were eradicated or occupied by the military. The slogan "rifles and beans" meant that pacified communities would get "beans," while all others would be the target of army "rifles."

In March 1983, Americas Watch condemned the Guatemalan army for human rights atrocities against the Indian population.

New York attorney Stephen L. Kass said there was proof that the Guatemalan government carried out "virtually indiscriminate murder of men, women and children of any farm regarded by the army as possibly supportive of guerrilla insurgents."

Prosecutors asked on Wednesday that both men be sentenced to 75 years in prison. A verdict is scheduled for Friday, although the judges have given no indication when they might deliver the verdict.