An obscure leftist group has claimed responsibility for the shooting deaths of two members of the far-right Golden Dawn party. Counterterrorism officials are investigating the authenticity of the group's claim. 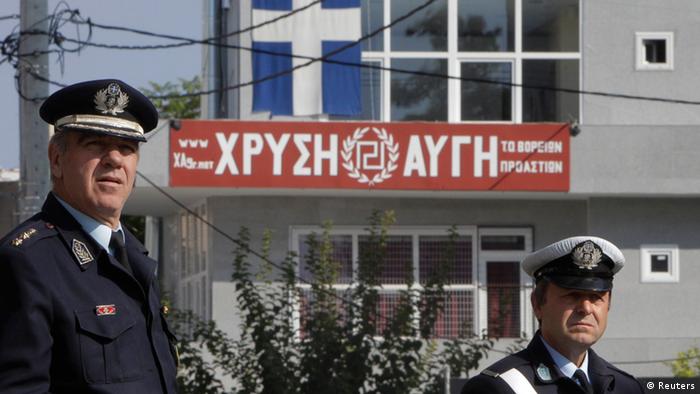 The People's Struggling Revolutionary Powers, a group previously unknown to authorities, claimed on Saturday that its gunman had killed the two Golden Dawn members in retaliation for the murder of rapper Pavlos Fyssas.

"We, the People's Struggling Revolutionary Powers, claim responsibility for the political executions of the fascist members of neo-Nazi party Golden Dawn," the group said in a message posted on the Greek news website Zougla.

"The attack was an act of retaliation for the murder of Pavlos Fyssas," the group said. The anti-fascist Fyssas, also known as Killah P, was stabbed to death by a Golden Dawn supporter in September.

An anonymous caller had tipped off Zougla to the location of a USB stick, which contained an 18-page letter written by the leftist group that claimed responsibility for the shootings. The news website found the USB stick in a plastic bag in the Athens' suburb of Kaisariani.

Golden Dawn members Emmanuel Kapelonis, 22, and Giorgos Foundoulis, 27, were gunned down on November 1 in a drive-by shooting outside the far-right party's local offices in an Athens suburb.

Since the shootings, Golden Dawn's approval ratings have risen from 6.6 percent to 8.8 percent, according to a survey by pollster ACLO for the newspaper Proto Thema. The far-right party's favorability had sunk by almost a third in the aftermath of the murder of rapper Fyssas.

Last week, Public Order Minister Nikos Dendias had warned of "the beginning of a spiral of terrorist attacks and a bloody vendetta with insecurity spreading in society."

The government has cracked down on Golden Dawn, Greece's third largest political party, since the murder of Fyssas. Party leader Nikolaos Mihaloliakos and five senior lawmakers face trial on charges of belonging to a criminal group.