Greek haircut: When 50 percent is not half

When private investors agreed to write down Greek sovereign debt holdings last week, EU leaders described the deal as a breakthrough. But the 50 percent 'haircut' doesn't mean half of Athens' problem will simply go away. 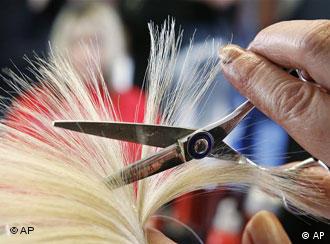 Can a 'haircut' really help Greece pay off its debts?

Greece is currently burdened with approximately 350 billion euros of sovereign debt. Just over 200 billion is held by private investors - mainly banks. The remainder is held by the European Central Bank, the International Monetary Fund, and other EU and non-EU states.

After long negotiations with EU leaders in Brussels last week, private sector representatives from the banking, insurance and financial industries agreed to write down their debts by 50 percent - on a voluntary basis.

The voluntary nature of this haircut was a crucial component of the eurozone rescue deal. A mandatory writedown that disregarded investors' wishes could have triggered payments on Credit Default Swap (CDS) contracts – freely traded financial instruments that act like an insurance policy against default or debt restructuring.

Difficulties tracking the distribution and value of these unregulated contracts have raised concerns that a Greek CDS "credit event" could inflict serious damage on exposed lenders and spark another major financial crisis.

But the body that presides over CDS claims, the New York-based International Swaps and Derivatives Association (ISDA), does not expect action to be taken.

"Based on what we know it appears from preliminary news reports that the bond restructuring is voluntary and not binding on all bondholders. As such, it does not appear to be likely that the restructuring will trigger payments under existing CDS contracts."

Even if all private investors, banks, and insurers write down half of their Greek debt holdings, they would only reduce Athens' liabilities by about 100 billion euros – or less than 30 percent of the total debt pile.

With almost 80 billion euros invested in Greek sovereign bonds, Greek banks hold a large portion of the 200 billion euros worth of debt currently in private hands. It remains to be seen whether these troubled lenders are really in a position to take a voluntary haircut.

"They wouldn't be able to raise that kind of money on the markets. The banks would need to be taken over by the European Financial Stability Facility (EFSF) until new capital becomes available," he added.

If all Greek banks opted out of the writedown plan, the amount of debt wiped in the EU rescue plan would fall from 100 billion to just 60 billion euros – or 17 percent of total Greek debt. 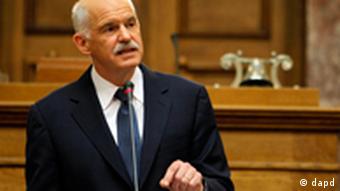 Papandreou wants Greeks to approve the rescue plan in a referendum

A bit off the top?

That impact of the "haircut" could shrink even further given that the International Institute of Finance (IIF) does not know the identities of all private holders of Greek sovereign bonds – investors it was intended to represent at negotiations in Brussels.

If both the Greek banks and all the unidentified investors choose to defy the voluntary writedown, the eurozone deal would only succeed in cutting Athens' sovereign debt by 23 billion euros – or 7 percent of its total liabilities.

Just who opts in and who opts out of the haircut plan remains to be seen. Much will depend on development in Greece itself. The Association of German Banks said Prime Minister George Papandreou's recent call for a national referendum on the eurozone bailout strategy had "delayed, and perhaps even frozen" the detailed planning process. No one knows what will happen if Greek voters reject the EU plan, it added.

Opinion: Greece must take its medicine

Germany and France have given Greece a clear ultimatum: Accept the conditions of their aid or kiss the euro goodbye. DW correspondent Daniel Scheschkewitz says Greece cannot expect to have it both ways. (03.11.2011)

Crisis mode in Cannes as Greece upsets the G20 applecart

Cannes - the posh Mediterranean playpen of the European elite - is in the media spotlight again; but this time it's for a three-day G20 summit focused on sorting out the financial fate of Greece. (02.11.2011)