Greek coalition split over racism | Europe | News and current affairs from around the continent | DW | 03.06.2013

As racist violence surges in Greece, the parties in the coalition government are further apart than ever on the way forward. Under pressure from the EU and rights groups which way will MPs jump? 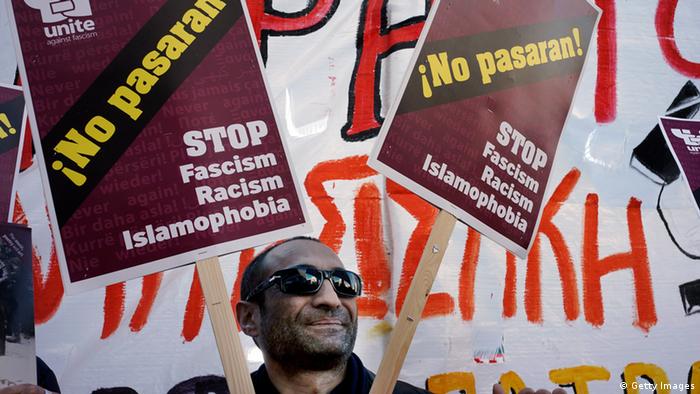 In the last twelve months there has been a surge in anti-immigrant violence in Greece, with three deaths due to racist attacks and more than 150 injured.

In early May, unknown assailants attacked a 14-year-old Afghan boy on the streets of Athens with a broken bottle and caused him serious injuries. Just a few days earlier, three foremen at a strawberry farm shot and wounded unarmed immigrant workers from Bangladesh as they refused to return to work in a dispute over unpaid wages.

Meanwhile, the extreme right is increasingly represented in Parliament: the neo-Nazi Golden Dawn party has 18 out of a total of 300 members in the Greek parliament. Last Wednesday night (29.05.2013) several thousand party supporters attended a rally in central Athens chanting, “Foreigners out of Greece.”

In the sixth year of recession, Greece has more illegal immigrants than any other European Union country. As right-wing sentiment soars, the coalition government is under increasing pressure from both the EU and human rights groups to toughen anti-racism laws.

To change the law or not? 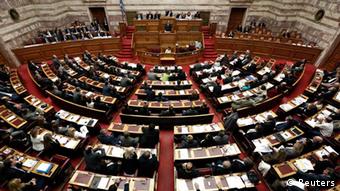 If it were up to Justice Minister Antonis Roupakiotis of the Democratic Left party, the Greek Parliament would long ago have introduced a stronger anti-racism law and adopted tougher penalties for people making racist statements, Nazi sympathizers and Holocaust deniers. But, just days after a new bill was introduced in Parliament, politicians of the left were told by the conservative Prime Minister, Antonis Samaras, that: "Existing laws are enough."

Sofia Voultepsi, spokesperson for Samaras' New Democracy party, believes a change in the law, which would criminalize incitement to commit racial violence and any denying of Nazi crimes committed during World War II, is currently unnecessary.

"Our constitution and the applicable penal laws are more than sufficient to confront racism and xenophobia effectively, it's not a lack of laws," she says. And it is not Greece's biggest problem: that's the seven-year-long economic crisis. That is what the government must take care of, she warns.

She rejects any suggestion that racist attacks in the country are a problem: "What are you trying to say? For example, that the perpetrators are not being prosecuted?" The laws are adequate and are being implemented - anyone who says anything different is only trying to discredit Greece abroad, she says.

Pressure from abroad can help

According to Greek media reports Samaras fears increased pressure within his own party if stricter anti-racism legislation comes before Parliament. If, for example, the denial of genocide is explicitly criminalized, then conservative deputies would probably want to tackle the issue of whether someone who denies Armenian genocide should face a prison sentence - a debate that is likely to create foreign policy tensions. 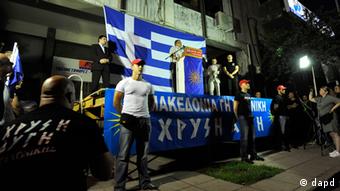 Now the dispute in Athens is escalating: The prime minister's two smaller coalition partners - the socialist PASOK party and the Democratic Left - are jointly calling for a tougher line.

And they are calling for outside help. Democratic Left deputy Maria Giannakaki insists that Samaras will only agree to concessions under pressure from abroad. She says the existing law "is now obsolete. That's why today we need a new, comprehensive piece of legislation."

Now the socialists and the moderate left have closed ranks and submitted a joint bill to parliament.

In addition, the junior coalition partners want to get closer to the radical left-wing opposition, which is announcing its own bill. Thus, the confusion will be complete: deputies will have to choose between three different drafts and not one of them would have any prospect of gaining a majority.

With a degree of irony one commentator remarked that if Golden Dawn had even the slightest sense of humor, they would have proposed their own anti-racism law.

At least in one regard, the conservatives and the parties of the left agree: legislative changes alone cannot defeat racism. Changes in the whole society are required, says Giannakaki.

"A debate on xenophobia is urgently needed," she warns. During World War II, Greece suffered more than any other country under the Nazi terror. It is absurd, she says, that Hitler's admirers are now sitting in the Greek Parliament.

A confrontational tone is emerging in Greek society as racist attacks increase and political conflict escalates. Observers believe the economic crisis is just one of the reasons for the unrest. (29.08.2012)