Greece's fragile coalition has agreed to 11.5 billion euros ($14.1 billion) of austerity cuts, paving the way for the next tranche of international bailout payments. 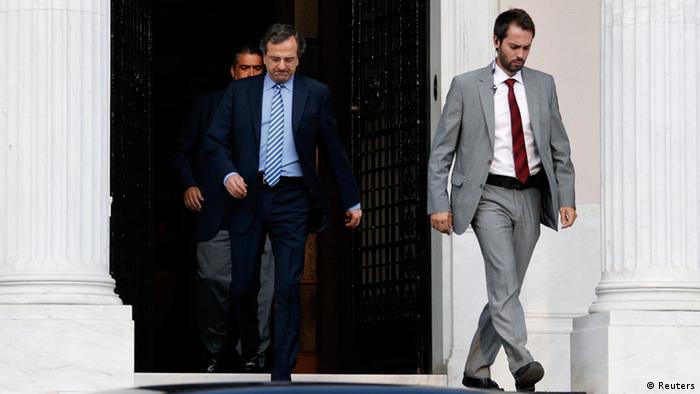 The Greek coalition led by conservative Prime Minister Antonis Samaras has put aside its differences over austerity cuts, with the junior partners dropping their demands for an immediate re-negotiation of the terms of the international bailout deal.

Will an unlimited bailout fund save the euro?

It seems the euro rescuers will do anything to save the eurozone. But what does anything mean? We might know more on Thursday, when the European Central Bank decides on a possible way out. (01.08.2012)

"If the prime minister believes that the immediate adoption of all the 11.5-billion-euro measures will then allow him to negotiate, and that only that will secure payment of the next loan installments and the country's position in the euro, I am obliged to accept his estimate," Venizelos said.

But Venizelos insisted that the new cutbacks should not involve "unfair, across the board measures."

The agreement will ease talks with the so-called troika, comprising the EU, the International Monetary Fund (IMF) and the European Central Bank (ECB).

Visiting inspectors from the three institutions are to assess whether Greece is meeting bailout requirements to qualify for the next tranche of a 130-billion-euro bailout. They will meet Finance Minister Yannis Stournaras on Thursday.

With 3.2 billion euros worth of bond payments due in August, the clock is ticking for Greece to please the inspectors. Greece blames a deeper than expected recession for falling behind in its reform efforts. Lenders say the country has not implemented reforms quickly enough.