Greece's new leftist government has announced it would stop the sale of the country's biggest port and other state assets, defying demands from its creditors to boost privatizations in exchange for further funding. 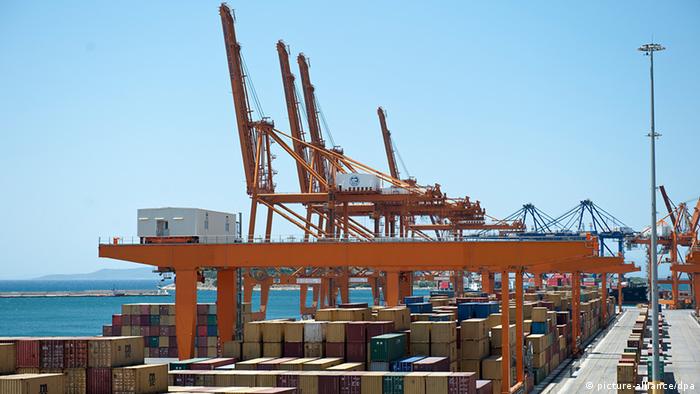 Greece's new leftist-led government on Wednesday, announced plans to stop a number of privatizations in the transport and energy sector.

The sale of state-owned Public Power Corporation (PPC), known in Greece as DEI, would be halted immediately, Energy and Environment Minister Panagiotis Lafazanis told Greek radio station Skai. In addition, planned privatizations in the railway sector, including state-owned operator Trainose and rolling stock company ROSCO, would be reviewed, he said.

Already on Tuesday, Greece's deputy minister in charge of the shipping portfolio, Thodoris Dritsas, said the plannned sale of a 67 percent stake in the Piraeus Port Authority was on ice. The privatization was agreed under the country's bailout deal with its international creditors, and China's Cosco Group was hotly tipped as favorite on a shortlist of suitors.

"The Cosco deal will be reviewed to the benefit of the Greek people," Dritsas told the news agency Reuters.

In his campaign for prime minister, the leader of the leftist Syriza alliance, Alexis Tsipras, vowed to stop the sale of state assets. However, privatizations are a key plank of the 240-billion euro ($272-billion) bailout agreement the debt-laden eurozone country struck in 2012 with its international creditors, the EU Commission, the European Central Bank (ECB) and the International Monetary Fund (IMF)

During his cabinet's inaugural meeting on Wednesday, Tsipras said that he would seek a "fair and mutually beneficial" solution with its EU creditors on renegotiating Greece's huge debt

The 40-year-old premier added that his administration was one of "national salvation" that was ready to "bleed" to restore his nation's battered dignity.

After the government announced the freeze in privatizations, shares in the PPC utility fell by 7 percent while those in the Piraeus Port Authority slumped almost 9 percent.

Yields on 10-year Greek bonds rose above the symbolic barrier of 10 percent, meaning the country is set to pay higher cost for borrowing in future.

A sharp decline in banking shares pushed the Athens stock market down by about 5 percent. Investors are increasingly worried that Greek banks might be cut off from ECB funding, threatening their liquidity, once the country's existing bailout deal will expire at the end of February.

Greek Prime Minister Alexis Tsipras has appointed a man who calls himself a "libertarian Marxist" as his new finance minister. But who is Yanis Varoufakis, the so-called scourge of the EU's austerity politics? (27.01.2015)

Opinion: How the EU and Tsipras could work together

The new Greek prime minister is making excessive demands on the country’s international creditors. But maybe he’s the only one who can make the changes Greece needs, says DW’s Christoph Hasselbach. (28.01.2015)

Though Greece's economy was slowly improving, many voters had run out of patience. Less than 24 hours after polling stations closed, leftist Alexis Tsipras has become premier. Joanna Kakissis reports from Athens. (26.01.2015)