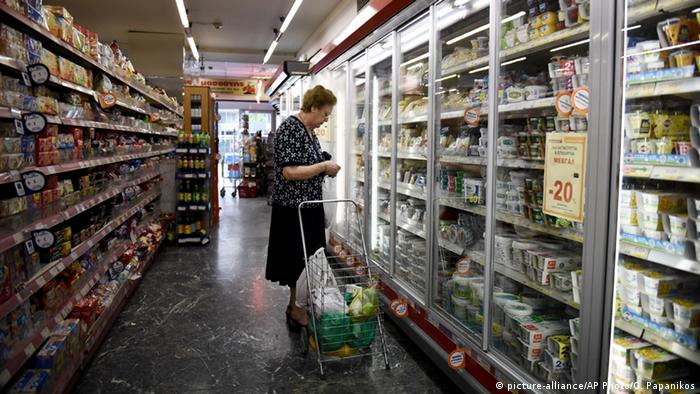 The latest joke about the crisis making the rounds in Greece goes like this: Kostas buys a package of spaghetti at the grocery store and the cashier asks routinely: "Would you like it gift wrapped?" "No thanks, it's for me," he replies.

It's a good idea to keep your wit and humor in times of crisis. But it's not possible to laugh away the fact that as of Monday everyday life will become much more expensive in Greece. An increase in value-added tax on basic foodstuffs and certain services was a key demand of Greece's creditors, and was approved by the Greek government last week after heated debate. 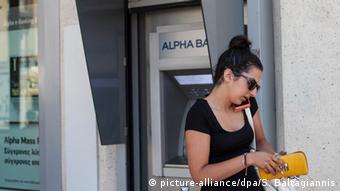 Despite closed banks, Greeks have been consuming more

The result: For rice, pasta, pastries, sausage, coffee, tea, sugar and other foodstuffs, VAT will go up to 23 percent. It's hoped the move will quickly increase government revenues. The treasury expects revenues of 54 million euros ($58.4 million) from higher VAT on baked goods alone - provided, of course, that demand doesn't collapse.

"A tax increase may boost government revenues in the short term, while increasing the chance of recession over the medium term. One does not rule out the other," he explained.

In recent years, Greeks have exhibited unusual economic behavior that would be hard to use as a basis for forecasting, Petrakis said, using the bank closures as an example.

"For fear of losing their savings completely, many people consumed not less but suddenly more and paid electronically. It's fascinating that it is precisely in this economic predicament that demand for certain goods does not decrease, but suddenly leaps," he said.

Greek banks set to re-open amid effort to reboot economy

Banks in Greece are preparing to re-open after a three-week shutdown that saw the country plunged into financial chaos. However, capital controls are to remain in place, with taxes set to shoot up. (20.07.2015)

The Baltic states are fairly new eurozone members. But after turning their economies around following deep recessions, many think Greeks should follow their lead and tighten belts for recovery, as Gederts Gelzis reports. (20.07.2015)

Merkel says Grexit off the table, rules out debt write-off

German Chancellor Angela Merkel has rejected the idea of a Greek debt haircut, saying it wouldn't work in a currency union. At the same time, she has also ruled out forcing Greece to leave the eurozone. (19.07.2015)

For many Albanians, Greece was the promised land. Today, the economic crisis is not only affecting migrant workers but also hitting Albania's domestic economy. And coming home can be difficult, reports Angelina Verbica. (19.07.2015)

A study by the Athens Institute for Retail Research (IELKA) suggests higher tax rates will place an added average yearly burden of 157 euros ($170) on each household. The tax rate will also be raised in the restaurant and hotel industry, and taxis will also become more expensive. And that's not all: small businesses must expect higher tax prepayment. The solidarity surcharge on higher incomes will be raised retroactively to the beginning of the year.

Many experts are certain that the VAT increase won't bring much additional revenue for the government, and instead only reinforce Greece's slide into recession.

"Taxation measures like these drain resources from the economic cycle and aggravate the recession," economist Michalis Argyrou said.

There's only one reasonable way to compensate for this extra burden: an investment boom for Greece. But even this would only be effective over the middle term - and it would require reliable rules for interested investors.

"The most important aspect would be an improved legal certainty, a reform of the public administration and a modern insolvency law," said Argyrou. "The Greek people must finally have an optimistic outlook for the coming years. This is something that the government should pay attention to."

In negotiations with its creditors, Athens relented on an important condition and agreed to drop the tax breaks for Greek islands, which have long enjoyed tax rates that are 30 percent lower than those in the rest of the country - a compensation for higher transportation costs for both locals and visitors. These tax breaks will come to an end in October. 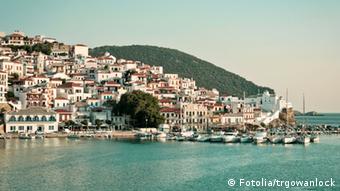 From October, holidays on the Greek islands will also be more expensive

"Increased revenues from the islands are expected to contribute to the annual target of 2.2 billion euros from VAT payments," Petrakis said. But the Greek trade association ESEE warns the cost of living on the islands could rise by 12 percent.

At least there's some good news. As of Monday, Greek banks are due to reopen after a forced three-week break - though this is ultimately more of a symbolic move. Capital controls and strict daily limits for cash withdrawals are likely to remain in place, and it is still not be possible to cash out fixed-term deposits.