Greece ailing, but Italy not far behind

It's no coincidence that Greek Prime Minister Alexis Tsipras included Italy in his first European tour. Both states oppose Brussels' austerity course, but it is Italy that is struggling the most when it comes to reforms. 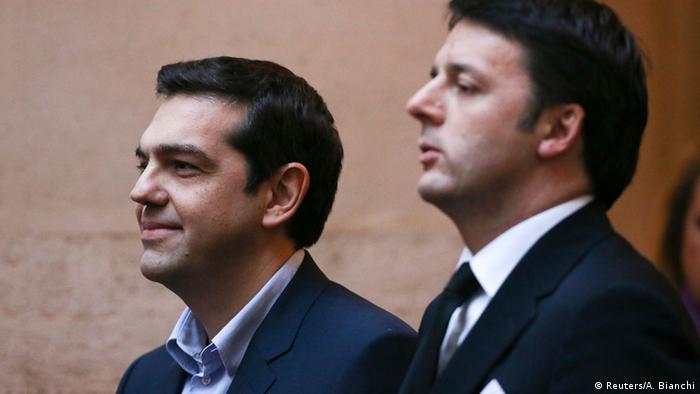 Italy's economy tells a tale of procrastination. It is still Europe's third-largest. It boasts a much bigger and broader industrial base than in Greece, and Rome did not have to seek an international bailout like Greece, Portugal or Ireland. But it hasn't really grown for the last 20 years, nor has productivity increased. The 2007 financial crisis merely exposed its weaknesses.

As Italian Prime Minister Matteo Renzi hosts his Greek counterpart Alexis Tsipras in Rome, the Italian economy is in recession; in fact, it has posted growth in just one quarter since mid-2011. Unemployment is at 13 percent and, what's worse, Italy has the second-highest EU rate of young people who are not in work, education or training, so-called NEET persons. Only Greece fares worse.

Corruption is widespread, with Italy ranked as one of the most corrupt countries in Europe by Transparency International. Again, Greece is high up on that list, too. Italy has also seen more firms go bust since the global financial crisis started in 2007 than any other European country, according to OECD data.

One reason for that is Italy's rampant bureaucracy, especially in the legal system.

Trying to dismiss an employee, for example, usually involves lengthy trials that can take up to four years. Foreign direct investment (FDI) is practically non-existent.

Enter Renzi, who has promised to "put the turbo" on the reform process, as he put it recently, after years of "a piecemeal approach" to reforms and frequent government changes that have led to "a procrastination of the reform process," Alessio Terzi, affiliate fellow at the economic think tank Bruegel in Brussels told DW.

Along with a reform of the Senate that is designed to speed up parliamentary decisions, the government has managed to push through the Jobs Act, which aims to stimulate job creation by making the hiring - and firing - processes easier.

Whether it's successful or not depends a lot on the details of the legislation, the formulation of which is likely to get bogged down with too many interests, thus rendering it useless, due to Italy's "extremely bureaucratic and legalistic culture that is very inefficient," says Stefan Collignon, professor for political economy at Sant'Anna School of Advanced Studies in Pisa.

"It's all very formalized and not focusing on what the law is actually meant to achieve," he told DW. It applies to other laws, too. You may find yourself wanting to terminate a phone contract, for example, but if you can't refer to the exact legal paragraph that applies for such terminations in your letter of notice, you may not succeed, Collignon explains. 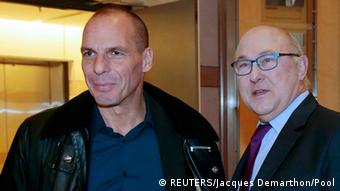 France sympathizes with Greece but warns of a rift within Europe

He says Renzi is serious about reforms, "but what people say left, right and center is that ,as well-intended as he may be, the system will not allow him to make a real difference."

Those problems will sound familiar to his Greek counterpart, but his country has made decent strides in the reform process, at least when compared to Italy. "That means that in terms of ease of doing business, the two are not that far apart," Terzi says.

"We saw a lot of progress in all indicators, such as the labor maket, doing business and product regulations. By comparison, Italy has done very poorly and very little," Terzi told DW.

Italy has repeatedly spoken out against the eurozone's austerity course, as has France, so it comes as no surprise that Tsipras snubbed Germany on his first European tour in favor of visits to Rome and Paris. He is "clearly trying to build a coalition that supports him against the German austerity drive," Collignon told DW.

He thinks the strict austerity drive "was clearly mistaken, but by antagonizing Brussels and Berlin in this way, Greece threatens the stability of the eurozone, he believes. It could even trigger a crash of the Greek banking system, which would have repercussions for the whole bloc.

Terzi also thinks that, perhaps,there has been too big a focus on austerity in the eurozone crisis, but clearly "something had to be done." A much stronger emphasis is needed, he says, on economic union and improving the coordination of structural reforms throughout the EU.

Portugal had made many sacrifices before it could leave the troika's rescue program in 2014. That is why Portugal is staunchly opposed to special treatment for Greece, reports Jochen Faget from Porto. (03.02.2015)

Paris, Rome, London: Greece's new prime minister and finance minister are bound for European capital cities, seeking support for their new economic plans. Berlin is conspicuous in its absence from the Syriza itinerary. (01.02.2015)