Grappling with Graffiti′s Darker Side | Germany| News and in-depth reporting from Berlin and beyond | DW | 07.04.2005

Grappling with Graffiti's Darker Side

When it comes to graffiti, one man's art is another man's vandalism. On Thursday, Berlin hosted the first International Anti-Graffiti Conference where participants looked at ways to put a lid on the spray cans. 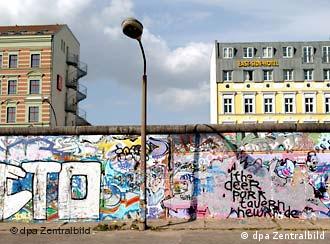 To some, the mostly illegible scrawls, stylized names and often fantastical pictures on walls, bridges, subway trains -- indeed, almost any surface in the urban landscape -- are an art form with an edge. They're rebellious, daring and, yes, even beautiful.

To others, graffiti is nothing but pure urban blight, a disfiguring disease that creeps into neighborhoods, signalling their decline. In their opinion, the so-called "tags," the scrawls and strange pictures are a scourge that brings property values down, represent out-of-control youth culture and are criminal acts which should be punished. 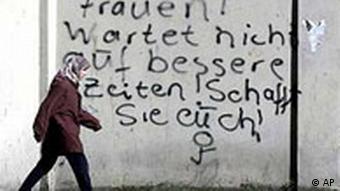 It appears that the spray can artists, or vandals, depending on your perspective, are going to be facing tougher times ahead.

At the first international conference on fighting graffiti, some 200 people came together to discuss ways to combat graffiti and discuss changing the law to impose stiffer fines and penalties for defacing property. The conference, organized by a Berlin association called "Noffiti," brought together people from across Germany, seven European countries and the US.

According to Noffiti, damage caused by graffiti is estimated at 500 million euros ($645 million) annually. In Berlin alone, 50 million euros are spent to clean up after "writers," often how graffiti artists refer to themselves.

Thursday's conference participants cast an eye toward their northern neighbors, the Scandinavian countries, whose "zero-tolerance" strategies have proven successful in reducing the amount of graffiti in their cities. There, graffiti is removed as quickly as possible by city authorities, usually within 24 or 48 hours. 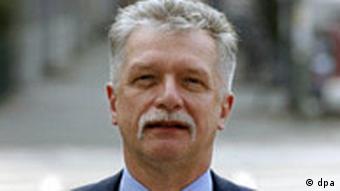 "That discourages the 'sprayers'," said Karl Hennig, the founder of the Noffiti group, in an interview with German public radio. He said that is because most graffiti artists want their work to be on view for as long as possible.

The Scandinavians also have stricter penalties against graffiti, and sentences of up to two years in jail can be imposed in serious cases.

"I think people have had enough of vandalism, but we have to come to a societal consensus about it," he said. "The success of the Nordic counties is due to the fact that all parties have come together to fight graffiti vandalism."

Pressure to change the law

At the conference, German politicians from several parties and federal states expressed their desire to crack down on graffiti artists through legal means. Baden-Württemberg announced it would seek to have the upper house of parliament, the Bundesrat, increase penalties on those wielding spray cans.

According to Berlin's social democratic justice minister, Karin Schubert, decreasing the amount of graffiti can only be achieved through tougher legal measures, such as defining the application of graffiti as a punishable act. Under current German law, graffiti is only punishable if it can be proven that the spraying itself or the removal of the graffiti resulted in damages to the surface under it.

"We have to clearly show the mostly young people who do this that illegal spraying is punishable," she said.

But not everyone is ready to go after the graffiti artists with new laws. The youth division of the Green Party, part of Germany's ruling coalition, has criticized the desire for criminalization, saying it would do little to discourage the activity and only create a new class of criminals. 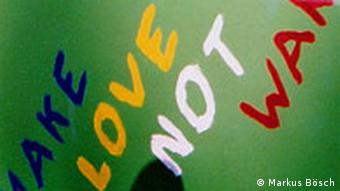 According to the group's speaker, Stephan Schilling, the costs for removing graffiti should be covered by homeowners or the government.

"We should consider graffiti as simply a societal peccadillo," he told the dpa news agency.

But the GdF police union called on the Greens to change their attitude, saying the party's continual resistance to a change in the law only served to support "growing criminality and an increasing societal neglect," said the union's head, Konrad Freiberg.

Even among the Greens' governing partners, the Social Democrats, attitudes towards graffiti are hardening and more are willing to categorize it as a punishable offense.

If spraying and tagging does end up being reclassified, it could make life more difficult Germany's estimated 8,000 active graffiti artists. Frank Lämmer, one of Berlin's most well-known "writers" who has turned from illegal spray painting to accepting large-scale commissions to cover walls with his art, told the Berliner Zeitung newspaper that all the tough talk was not likely to help in the way the anti-graffiti forces want it to.

"We have to somehow enter into a dialog," he said, otherwise both sides will just pursue more and more radical means to achieve their goals. 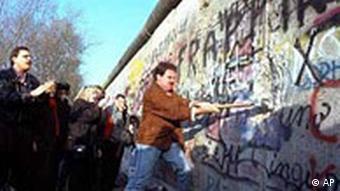 He pointed out that in the past, in West Berlin, graffiti used to be admired, at least the work that appeared on the western side of the Berlin Wall. Then, the graffiti represented the freedom of expression those in the west enjoyed. Not anymore.

Graffiti is so yesterday. These days any self-respecting metropolis has stickers and other types of "New Street Art" plastered everywhere. (April 7, 2004)

A Last Stretch of the Berlin Wall Fights Fate

The famous murals painted on the longest standing stretch of the Berlin Wall are crumbling away with the weather and crowds of souvenir-hungry tourists. But nothing is being done to save the East Side Gallery. (Aug. 24, 2004)