Graphic Novel Tackles Taboo of the Holocaust | Germany | News and in-depth reporting from Berlin and beyond | DW | 01.02.2008

How do you inform increasingly history-weary teenagers about the Holocaust? An institute in the Netherlands has come up with an unconventional way to deal with Germany's dark past in the classroom -- a comic book. 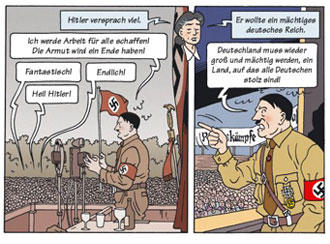 For the past two days, Thomas Heppener has been besieged by calls from journalists. Ever since the director of the Anne Frank Center in Berlin unveiled plans for a comic book on the Holocaust in German schools, media interest has been intense.

Germany's mass-selling Bild tabloid on Thursday, Jan. 31, published excerpts from the book, under the headline "Hitler Comic for German schools." 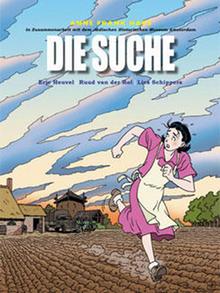 "Die Suche" is a milestone publication

"I'm a bit surprised at the intense reactions the plans have sparked," said Heppener. "Of course if you hear the words 'Hitler comic' you're going to be taken aback at first. But if you look closer, you'll see it's a serious attempt to find new ways to approach history at a time when Holocaust witnesses are dying out and young people are increasingly uninterested in that period."

The plans for the unusual teaching tool come amid concerns following studies showing that post-unification German children know appallingly little about the Holocaust.

There appears little interest in the increased coverage of the period in the lead up to the 75th anniversary of Hitler becoming chancellor, on Jan. 30, 1933, and youngsters seem to switch off when faced with the continuing controversy over any public mention of the Nazis.

The book, a first in Germany, is to be introduced in a six-month pilot program in 15 high schools in Berlin and the state of North-Rhine Westphalia and is meant to supplement existing history lessons.

The novel, which will be accompanied by historical data and background, will also be tested in Poland and Hungary.

Through the eyes of a fictional Jewish family

Originally produced by the Dutch-based Anne Frank Center and titled "The Search," the book traces key events of the Nazi era through the eyes of a fictional Jewish family, the Hechts.

Sketched by Dutch artist Eric Heuvel, who drew heavily on the style of Tin Tin creator Herge, the story opens in 2007 with Esther Hecht telling her grandson Daniel of her parents' arrest by the Nazis at the beginning of World War II and their subsequent deportation to Ausschwitz with a neighbor called Bob.

Esther manages to escape the death camp, but her parents were killed there. Daniel locates Bob, who also survives Auschwitz, after researching on the Internet which prompts Esther to begin speaking of her experiences.

The book contains sketches of Hitler's fiery speeches to the German masses, details of the infamous Wannsee conference of 1941 where the Nazi leader decided on the so-called "final solution," the horrors of the gas chambers and the arbitrary brutality in concentration camps.

A scene shows Bob arriving at the Auschwitz concentration camp

In one scene, an Auschwitz inmate is shot dead on the spot for appearing on parade without a cap. The next picture shows a shocked Daniel asking: "What! He was shot dead just for not wearing a cap?"

A breath of fresh air?

"The Search" has already been tested on Dutch schoolchildren and has been a success, according to Maatje Mostart, head of communications at the Anne Frank Center in Amsterdam. A predecessor to "The Search" was launched in the country in 2004 and is still used in schools across the country.

"Teachers have told us that students are surprisingly quiet when reading the comic book in class. Many are really moved by it and get really interested in the subject," said Mostart. "It's definitely something that strikes a chord with young people."

Though the comic book is bound to stir controversy in a country where public jokes about the Nazi era can get you fired and representation of any Nazi regalia is forbidden by law, it may well find acceptance in classrooms.

Recent studies show that Germans under 20 know exceedingly little about 20th century history. While Hitler is recognized by all, only one in three was aware of the meaning of the word, "Holocaust." Less than one in ten students could identify Nazi Propaganda Minister Joseph Goebbels.

History lessons in Germany are mostly a combination of straight lectures and discussions, weighty textbooks, documentary films and visits to concentration camps.

The comic book might just add a breath of fresh air to a complex subject that is sometimes treated too academically, according to some. 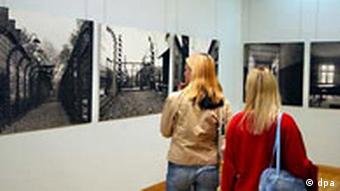 German students are weary of learning about the Holocaust, studies show

"Studies have shown that students are often weary of learning about the Holocaust at school and are emotionally overwhelmed by the sometimes morally-laden teaching of the era," said Verena Radkau-Garcia of the Georg Eckert Institute (GEI) in Braunschweig which focuses on research on international school textbooks.

"The comic book, if taught well and responsibly, can be a refreshing and interesting supplement to existing history lessons."

Students in Germany, however, are divided about the new teaching tool.

"I think it's about time that schools realized that graphic novels are here to stay and that they can teach a dry subject better than some dumb textbook," a 16-year-old told private German TV station, RTL.

Another teenager told the same channel that comic books were "way uncool."

That skepticism is shared by others who question whether students, who aren't interested in history anyway, could critically read a Holocaust comic book.

"It sounds a bit blunt but I think it's dangerous if students can't differentiate between a Holocaust comic and Mickey Mouse," said Henning Küppers, a history teacher at a high school in Stuttgart.

Others point out that "The Search" can hardly compare to other Holocaust comics, in particular Art Spiegelmann's famous "Maus" which is considered a classic and a revolution in the genre.

The European Commission's plans to collect data on air travelers landing in the European Union have been attacked by Germany's justice minister who warned that the measures would damage civil liberties. (29.01.2008)

Do you think the Holocaust comic book is a good way to teach today's teenagers about history? Please include your name and country in your reply.