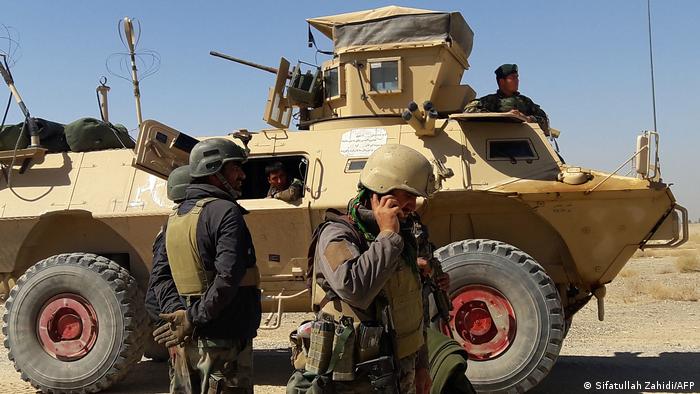 Unrelenting clashes in Afghanistan: near Lashkar Gah in Helmand province

He said Taliban fighters had attacked checkpoints on the outskirts of Helmand's capital, Lashkar Gah, and in other districts.

"Do not put the blame on us," Taliban spokesman Zabihullah Mujahid told the news agency AFP. He said government forces had "started the operation."

The regional government reported that 21 Taliban fighters had been killed.

The three-day ceasefire — only the fourth agreed in two decades of warfare — had expired late Saturday as the Eid al-Fitr holiday ended, rounding off the ritual Ramadan fasting season.

Interrupting Eid on Friday was a bombing at a mosque just north of Kabul that killed 12 worshippers and a prayer leader.

Responsibility was claimed by the Islamic State. IS also claimed online that it had destroyed electrical substations in recent weeks in several provinces. Kabul, Afghanistan's capital, suffered outages during the holiday.

Amid seemingly unstoppable conflict, negotiators for the Taliban and the internationally backed government in Kabul disclosed on Sunday that they had met in Doha, Qatar, over the weekend to renew talks.

"Both sides agreed to continue the talks," tweeted the Taliban.

Visiting Kabul in mid-April, US Secretary of State Antony Blinken urged such talks as the US continues to withdraw the last of its 2,500-3,500 soldiers — and NATO its remaining 7,000 allied troops — from Afghanistan, scheduled to be complete by September.

At the time, President Ashraf Ghani asserted that Afghan forces were "fully capable" of controlling the country.

On Friday, US and Afghan officials said Washington had vacated a southern airbase — handing over facilities to government forces — at Kandahar, a former Taliban stronghold.

In his phone call to his Pakistani counterpart, Shar Mehmood Qureshi, Wang said the pullout would "severely" affect regional stability.

Nishank Motwani, who researches security and diplomacy in Afghanistan from Australia, told the news agency AFP that the Taliban viewed the US's withdrawal as a win.

"It gives the insurgents a proclamation of victory, bookends their removal [in 2001] and eventual return to power, and signals that the end is in sight for the Afghan republic in its current state," Motwani said.

The Taliban denied involvement. IS is another suspect.

Afghan President Ghani on abuse of women: "This is part of our shame"

Before meeting with Angela Merkel in Berlin, Afghan President Ashraf Ghani talked to DW about corruption, security threats and human rights violations in his country.

Afghan ambassador to EU & NATO: No one wants the Taliban to return

The Afghan government is negotiating with the Taliban to find a peaceful end to decades of conflict ahead of a deadline to withdraw US troops. Can Kabul finally deliver on its promises to reform?