Google launches low-cost smartphone in Africa | World | Breaking news and perspectives from around the globe | DW | 18.08.2015

Mobile users in six African nations are being targeted by Internet giant Google, which has launched an inexpensive smartphone with them in mind. The Android One program is designed for easy connectivity. 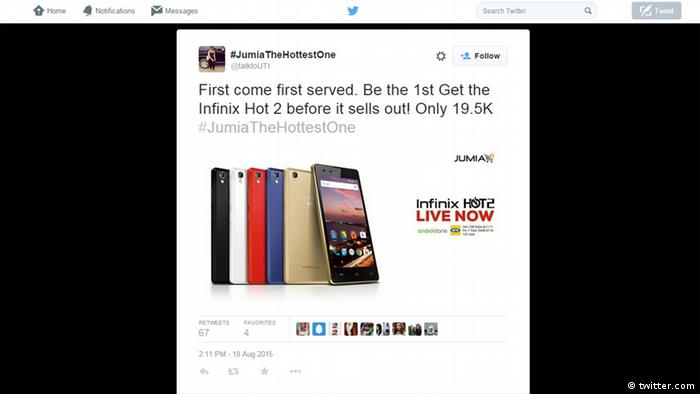 Life without a smartphone is unthinkable for many people today. The electronic devices do everything from helping us to plan our day and keeping us connected with friends and family, to allowing us to buy things online. They can even lock our doors for us when we're being too lazy.

According to a study cited by search giant Google, 23 percent of mobile phones in Africa will be connected to the Internet by the end of this year. Now the company is trying to expand its services in six African countries, including Egypt, Ghana, Morocco, Ivory Coast, Nigeria and Kenya with a combined population of 379 million.

The phone, which will operate on Google's Android One program is called the "Hot 2." It has been manufactured by the company Infinix and is being marketed in Africa through local sellers and websites such as Jumia.

"I was given one of them. It looks cute," says Gladys Nwachukwu, business development manager at Mobility Arena, a Nigerian blog that ranks and evaluates mobile phones and technical devices.

The phone's features, including a quad-core processor, dual SIM slots and an FM radio tuner, are tailor-made for places with low-speed Internet and power shortages. The device updates software immediately and has an extended battery life. The phone's YouTube app is designed to allow users to download videos to watch offline later - a handy feature when web access is unreliable -, Google's Vice President Caesar Sengupta said in a statement.

From Asia to Africa

These features are the reason why the phone has been so successful in Asian markets. Before the Android One, users had to make do with an unsatisfactory experience if they bought a smartphone, Mithun Mohandas, senior reviewer at Digit, an Indian technology website, told DW. Google's program, Android One, ensures that smartphone users buying any device have a satisfactory experience with the software.

The fact that the phones are relatively inexpensive makes them even more attractive. Most smartphones from different companies have a "fluid-like user interface which enhances user experience to a certain extent," Mohandas said. An Android One phone is essentially a stripped-down version of such "fancy" phones and uses fewer resources, increasing the efficiency of phone apps, he adds.

However, it remains to be seen whether Google's latest presentation will be as successful in Africa as it has been in India, Indonesia and other Asian countries.

People have been responding well and saying that the phone "is good value for money," Gladys Nwachukwu of Mobility Arena said. "We are excited to have a low-budget phone," she added.

They did it with downloads a decade ago, but will Apple once again be able to revolutionize the way we listen to music with the launch of their own streaming service, Apple Music? (08.06.2015)