Google Maps puts the harbor of the northern German city of Emden inside the Netherlands. After complaints, the company is working to fix it. But where the correct border lies is actually still a matter of dispute. 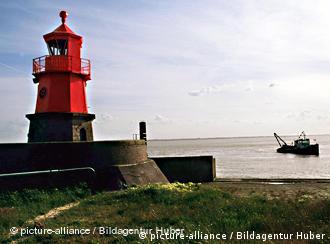 The city of Emden in northern Germany has lost its harbor - at least according to the Internet service Google Maps. According to maps of the area provided by the European Union, the border between the Netherlands and Germany runs neatly through the middle of the Ems estuary, leaving Emden and its port entirely in Germany.

But Google has the gray line demarcating the border wind deep into the inner harbor so that all an Emden resident has to do to visit the Netherlands is dip a toe in the waters off the city's piers.

A couple of years ago, the city of Emden began receiving e-mails from residents upset about Google's encroaching gray line. According to city spokesman Eduard Dinkela, Emden officials then contacted Google, alerting them to the error. Despite repeated e-mails, he said, no one at Google had responded and Google Maps continues to make the harbor part of the Netherlands.

"It just can't be that way," Dinkela said. "If they had used a little logic or looked at the history at all, then they would have noticed [the mistake]. But apparently no one at Google got that far or they don't do that there. In any case, they've marked it incorrectly."

But it's the history that in fact makes Google's job complicated. Emden and its harbor sit on Dollart Bay, part of the Ems estuary where the Ems river meets the North Sea. On one side of the estuary is Germany and on the other side is the Netherlands. Where the border between the two countries falls is less clear.

It's been an ongoing debate over the centuries and after World War II the two countries tried to come up with a formal agreement. But they couldn't, according to Dinkela. Instead, he said, "they agreed to disagree."

Germany sees the border running along the Netherlands' dikes on the Dutch side of the estuary; the Netherlands puts it further out into the water. But no one puts the Dutch border as far east as Google Maps.

Google has admitted that there appears to be a mistake in the map of the German-Dutch border. Company spokesman Stefan Keuchel said the error may be related to the ongoing dispute.

Google gets the data for its maps from a variety of sources, he said, including local providers. The goal is to have the most accurate and up-to-date information possible, and a "neutral or internationally recognized depiction of disputed areas."

"It's a challenge. We really work hard and are careful to interpret the data that we receive from our providers and correct any potential bias," he said. "There seems to be a mistake and we'll work hard to correct it."

Google is about to launch a challenge against a Madrid court that has ordered the removal of over 100 online newspaper articles from its search results. Critics say this sets a dangerous precedent. (17.01.2011)