Both of Germany's representatives will feel their Europa League fates are in their own hands after Gladbach lost narrowly away and Wolfsburg opened a two-goal cushion at home, in the first legs of their last 32 ties. 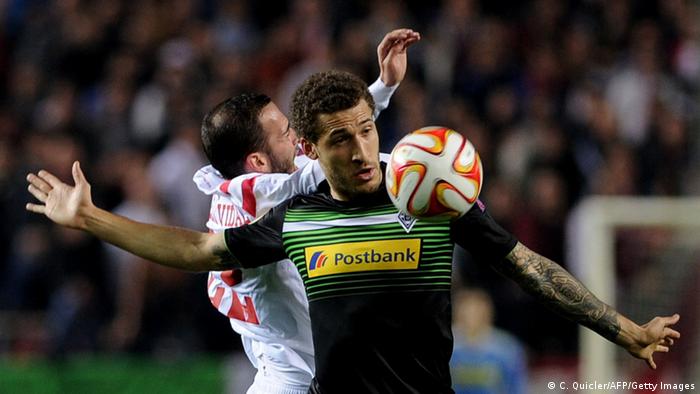 Two-time winners Borussia Mönchengladbach survived a second half onslaught from Sevilla to escape from southern Spain with only a 1-0 defeat in their UEFA Europa League last 32 first leg match on Thursday.

Defending champions Sevilla had only ever lost three European games at home while winning the trophy three times in the last 10 years, but Gladbach retain realistic hopes of progressing to the last 16 after a solid defensive display which delighted 2,500 traveling fans.

In a red hot atmosphere inside the cauldron-like Estadio Ramon Sanchez Pizjuan, the Gladbach defense was put under early pressure in front of a partisan home section in the Gol Norte stand.

For all of their attacking intent, however, Sevilla could not find a way through and it was Gladbach who began to impose themselves on the break as the first half wore on.

In the 19th minute Christoph Kramer’s fizzing drive from a Fabian Johnson cross was beaten away by Sergio Rico in the Sevilla goal, and Johnson was again involved when his run through the home defense was found by Raffael 15 minutes later. The American, though, was closed down well as he tried to lift the ball over the goalkeeper. 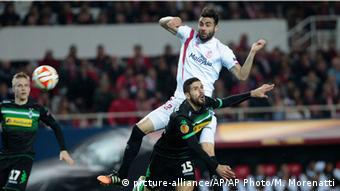 Vicente Iborra leapt highest to fire the only goal of the game for Sevilla against Gladbach.

Sevilla step it up

With the home fans growing restless, Sevilla stepped up their game in the second half and it was Vicente Iborra who calmed Sevilla’s nerves on 70 minutes when the midfielder met a pullback from substitute Diogo Figueiras to fire past Sommer.

Sevilla searched for a second but met a committed rearguard action from Gladbach, who were well marshaled at the back by youth team graduate Tony Jantschke. Substitute Max Kruse had the best chance of the second half for the visitors but with five minutes left on the clock he could only head tamely at Rico.

Bas Dost struck his first two goals in European competition as Wolfsburg secured a 2-0 win in their round of 32 first leg at home to Sporting Lisbon on Thursday.

Wolfsburg coach Dieter Hecking had spoken before the match of finding few weaknesses in the Portuguese side, but after a quiet first half it was a mistake from Nani which led to his side's first goal barely 60 seconds after the restart.

Showing quick feet, Naldo robbed the on loan Manchester United winger in midfield and slid a ball through to Dost, who fired under Patricio from eight meters. 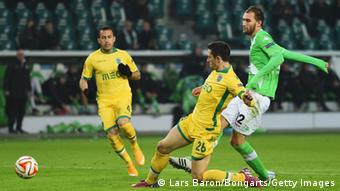 Bas Dost showed a poacher's instinct with his two goals.

Ten minutes later Wolfsburg's playmaker Kevin De Bruyne saw his shot saved at the near post, moments after Dost appeared to lose his bearings with a six-yard header which he aimed skywards.

In the 63rd minute Dost stole in for his second of the night after connecting at the back post with a perfectly-judged ball in behind the Sporting back line by De Bruyne. The Belgian now has 14 assists in all competitions this season.

Dost spurned a golden chance for his hat-trick when side-footing his shot straight at Patricio on 68 minutes, before Joao Mario missed a sitter four minutes later which could have put Sporting in the driving seat ahead of the second leg on February 26.

Wolfsburg and Hecking will now hope a two-goal advantage will be enough to secure a last 16 place in European competition for only the second time in their history.

In the pick of the night's other Europa League ties, Liverpool needed a late Mario Balotelli penalty to beat Besiktas of Instanbul 1-0, Inter Milan were held to a 3-3 draw at Celtic, and Napoli won 4-0 at Turkish side Trabzonspor.

Roma and Feyenoord drew 1-1 at the Stadio Olympico in a match overshadowed by reports of hooliganism by some of the estimated 6,500 Dutch fans to have traveled to the Italian capital.

Ronaldo strikes to become the first player to score in 13 consecutive away Champions League matches. Schalke have an uphill battle to climb if they want to rescue the tie in Madrid. (18.02.2015)

Although fresh from an 8-0 weekend win over Hamburg in the Bundesliga, Bayern were unable to find the target in Lviv after being forced to scale back their forward ambitions when Xabi Alonso saw red in the second half. (17.02.2015)