DW-WORLD spoke to Brazilian top model Gisele Bündchen about the World Cup, her German origins and her divided loyalties as a soccer fan. 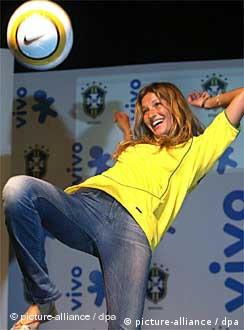 Gisele Bündchen was born -- together with her twin sister Patricia -- on July 20, 1980 in Brazil. Today, she is one of the most sought after and best paid top models in the world.

DW-WORLD: Who do you think should win the 2006 World Cup in Germany? And who should come second?

Gisele Bündchen: Brazil should, of course, become world champion. Germany could take the second place, since it is the country organizing the event.

Will you be watching the games?

I can promise, at least, that I'll watch some of it on TV.

What players do you think are indispensable?

I think Ronaldinho is extremely important.

What do you think about women's soccer?

I think it's great that women also play soccer.

And how do you yourself stay fit?

Sport is a wonderful thing and everybody should engage is some kind of physical activity. When I was a kid, I played volleyball and even took part in various contests. These days, when I have time, I go surfing, I do yoga or I play beach volleyball.

What would you describe as the best goal of your life? Did you ever score an own goal? Or did you commit a foul?

I think my best direct hit was my decision to become a model. As for fouls… Ah! Many. As that old saying goes: "Live and learn."

You are of German origin. Do you actually speak German?

Nein, ich spreche nicht Deutsch. I was born in Horizontina, a town in the backcountry of (Brazilian) state Rio Grande do Sul. The town was once mainly colonized by Germans. In the school which I attended, learning German was actually obligatory from third grade on. But being out of touch with the language for such a long time, I unfortunately forgot it.

My parents, on the other hand, still speak German today. When they meet their brothers and sisters, they often speak only German. I belong to the sixth generation of my family in Brazil.

Who says fashion has to be frivolous? A project organized by German Agro Action in cooperation with Deutsche Welle proves that fashion is an international language that can raise cultural awareness across the globe. (March 22, 2006)

German model Heidi Klum is a proper industry: In addition to modelling, designing sandals, advertising for McDonald's and hosting her own TV show, Klum has added author to her credits with a book on finding happiness. (March 10, 2005)

Two books, the covers of Vogue and TIME, a Super Bowl debut, and a 2036 presidential bid backed by Michelle Obama and Hillary Clinton. This poet has been busy.