Giant German Rabbits to Ease Hunger in North Korea | News and current affairs from Germany and around the world | DW | 11.01.2007 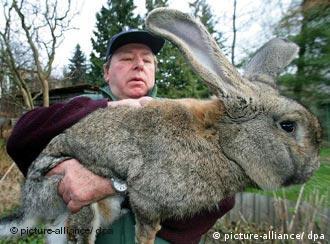 Karl Szmolinsky is taking his first trip abroad this April. But he's not going to a Mediterranean island, or Greece or Italy, or any of the other sunny spots most Germans choose for their vacations. He's headed to one of the most hermitically sealed countries on earth, ruled with an iron fist by an unpredictable dictator, and he's taking his bunnies along.

The 67-year-old is exporting his "German grey giants," which he's bred since 1964, to North Korea, which suffers from chronic food shortages and where, although hard information is nearly impossible to get, malnutrition and even starvation are believed to be common.

"I just want to help the Koreans," said Szmolinsky, who lives in the eastern German town of Eberswalde. He isn't going to get rich off the business deal. He'll receive around 80 euros ($104) per rabbit, meaning his profit margin is going to be small.

Ten of his rabbits are already there, and they've been placed in a petting zoo for children to run their hands through their plush coats. When Szmolinsky arrives, he will advise officials on breeding techniques for these biggest rabbits in the world, which can reach a weight of 10 kilograms (22 pounds) and produce seven kilograms (15.4 pounds) of meat.

Szmolinsky first heard that North Korean wanted rabbits in October. Shortly thereafter, an armored Mercedes limousine arrived at his place and asked the breeder to show him a few animals and then weigh them. The North Korean left impressed and the deal was done. Those bunnies were about to be on their way to the workers' paradise.

The breeder's rabbits could soon be common throughout Kim Jong Il's realm. In mid-September, the state news agency KNCA told the population that rabbits are the most "economically advantageous pets" around and that rabbit hutches should be put up pronto since the German giants produce "a lot of meat with just a little feed."

Now that's news they could use.

Germany is certainly facing serious problems, but it's also important not to forget to laugh once in a while. Read up on a selection on recent articles about funny events in Germany. (10.01.2007)

Not All Animals Are Born Equal

One German reindeer called -- not exactly surprisingly -- Rudolf is fighting for his right to say "no" to the commercial side of Christmas. (22.12.2006)

Ever wonder what a mole has to say? Did you know that birds sing in dialect? The Animal Sound Archive in Berlin has recorded 110,000 animal voices. Some are even available as ring tones. (29.08.2006)