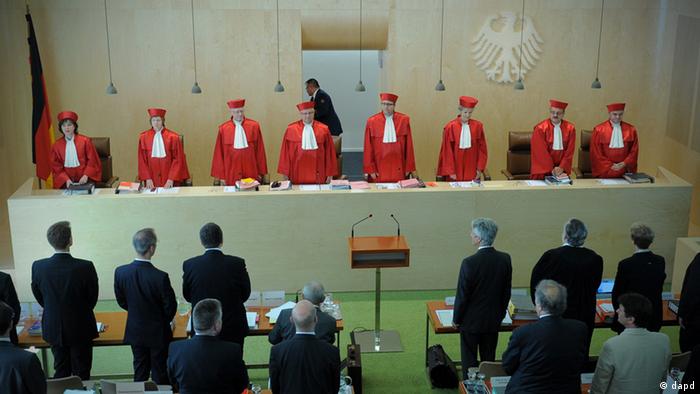 The Constitutional Court in Karlsruhe ruled on Tuesday that the European Stability Mechanism in its current form did not undermine the German parliament's autonomy on federal budgetary matters. At the same time, though, it confirmed that the government could not change the volume of national liabilities, currently to the tune of 190 billion euros ($264 billion) without first holding a parliamentary vote.

The judges found there were clearly defined stipulations as to what say national lawmakers had in any changes to ESM modalities - such as funding ceilings and total liabilities - and what minor aspects could be decided on by the cross-party budgetary committee without parliamentary approval.

A large group of opponents ranging from the parliamentary faction of the opposition Left party and the More Democracy organization to the deputy head of the Bavaria-based Christian Social Union, Peter Gauweiler, had brought lawsuits against the bailout fund as they feared parliament might be given short shrift when it came to changing the modalities of the ESM and above all the volume of financial injections that Germany could be liable for.

With a participation of 37,000 different claimants, it was the broadest constitutional lawsuit in the history of the Constitutional Court. Karlsruhe had already indicated that the ESM was legal in a preliminary ruling back in 2012, with the rescue fund to amount to 500 billion euros.

Not all questions resolved

Launching of the ESM

But Tuesday's ruling did not end all legal matters concerning eurozone bailout modalities. The Karlsruhe court has referred a complaint against the ECB's flagship bond-buying scheme to the European Court of Justice (ECJ).

The plaintiffs argued that so-called Outright Monetary Transactions (OMTs) exceeded the central bank's mandate and violated a ban on it funding governments directly or indirectly.

The OMT program was announced by ECB President Mario Draghi in September 2012 at the height of the sovereign debt crisis. The scheme has remained unused to date, with its power lying in the sheer promise of potentially unlimited sovereign bond purchases to keep struggling economies afloat.

The lawsuit deals with a series of sub-aspects to look into, making it a time-consuming affair for the European Court of Justice in Luxembourg. The ECJ is not expected to issue a ruling before mid-2015.

Germany has seen a huge rise in sales of electric heaters as the winter draws nearer. Many fear there will not be enough gas around to heat homes.