Germany's constitutional court is set to reassess the legality of data surveillance and storage. Rights activists and police are at loggerheads over conflicting priorities. 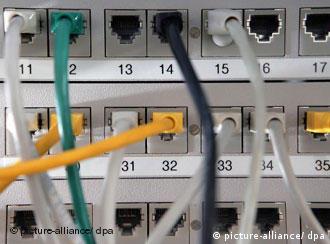 Critics have slammed the arbitary storage of Internet and telephone data

Germany's highest court faces a tough hearing on Tuesday after over 34,000 citizens, including the current Justice Minister Sabine Leutheusser-Schnarrenberger, filed a lawsuit against a two-year-old data law.

The law allows authorities to require communications companies to store telephone and Internet data for six months if it can help with police investigations.

Critics argue that the arbitrary storage and surveillance of Internet and telephone data infringes the privacy rights of the individual, a key freedom in any democracy. 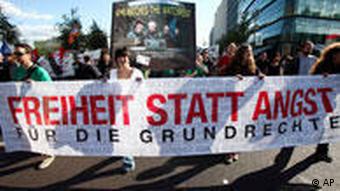 The data storage law has caused a massive outcry

"Data relating to all communication channels - no matter whether this is by telephone, mobile phone, or email, is being stored," says Dietmar Mueller, press officer of the federal data protection authority in Berlin.

"It may be only the details of the connections, not the content, but this still leads to vast data packages being held by the telecommunications companies at the request of the authorities," he said. "Keeping these large amounts of data always carries the risk that it may be used for other purposes."

But proponents of the law believe that this risk is negligible compared with the law's benefits, saying it has been effective in preventing many crimes, including terror attacks.

Konrad Freiberg, head of Germany's police union, is a staunch backer of the data storage law.

"Take the Sauerland group, for example, which planned attacks in Germany, or the terrible attacks in Madrid - in these cases, tracking down further offenders was only possible thanks to the data storage measures," Freiberg says.

But Mueller is not convinced that the law is as useful in foiling terrorist attacks as the police say.

"Opinions differ here, especially with regard to how the Sauerland group was uncovered," he says, "We shouldn't forget that terrorists also know of the data storage measures and they are most certainly capable of finding other ways to communicate with each other."

The original data storage law was already diluted by Germany's constitutional court in March 2008, allowing access to the stored data only for serious crimes such as murder or spreading child pornography. Freiberg stresses that all surveillance operations require approval from a judge and that the process is controlled by data protection authorities as well as the entire chain of police command. But he understands why people are concerned about what happens with their private data.

"I know how frightening technology can be. We have witnessed a lot of data abuse by private companies." Freiberg says, "But I must stress that the police has not let data be abused and there is judicial control at all times. It's important that we eliminate people's fears so that we can really protect them against crime."

So far Germany has been spared the terrorist attacks witnessed in other European countries. But now it is up to the constitutional court to assess whether data storage is as crucial as police say. The key question is how far can crime prevention measures go in a democracy. The Karlsruhe-based court is expected to rule on the case in 2010.

Data protection advocates in Germany have sharply criticized government plans to save sensitive employee data. The new system would store information on such things as strike participation, absenteeism and more. (13.12.2009)

The German government plans to introduce legislation that will make it harder for employers to spy on private data of their employees. (16.02.2009)