Germany's Constitutional Court has given the go-ahead for the government to approve a free trade agreement between the EU and Canada. Opponents claimed the CETA agreement would undermine democratic rights. 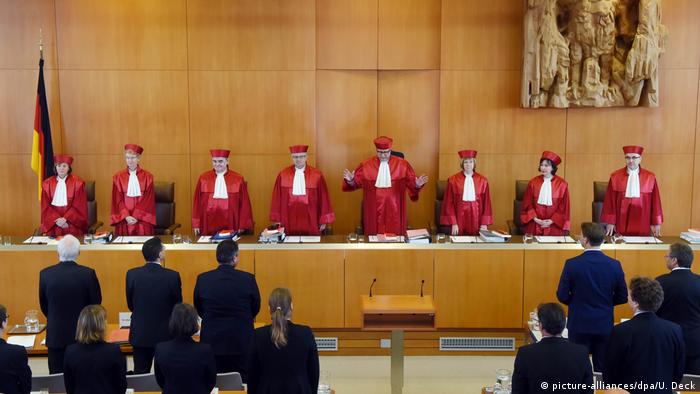 Following the ruling by Germany's highest court on Thursday, Berlin is now free to sign the Comprehensive Economic and Trade Agreement (CETA) at a meeting of EU trade ministers in Brussels next week.

Issuing its verdict less than 24 hours after hearing arguments, the court in Karlsruhe ruled, however, that the government must sign the controversial deal between the EU and Canada only on the condition that Germany can leave CETA again if forced to do so by a later Karlsruhe judgment.

Opponents of the agreement - including rights groups Campact, Foodwatch and More Democracy - fear that CETA will undermine workers' rights and environmental and consumer standards. They have collected signatures of about 190,000 Germans in support of their complaint.

Before the court, they argued the deal would subvert the German constitution because it did not leave room for parliamentarians to interpret the agreement or vote against it. German Economy Minister and Vice Chancellor Sigmar Gabriel also appeared in court on Wednesday to plead in favour of CETA, warning that Germany's reputation would be damaged if it derailed the deal. "I don't want to think about the consequences that could have for Europe."

On Thursday, he said he was "very satisfied" by the ruling and that the conditions imposed by the judges could be fulfilled "relatively easily" by the government. He described the decision as a "major step" toward a ratification of CETA, which in his opion would "finally" give globalization rules and also protect against a "bad EU-US trade agreement."

CETA aims to eliminate tariffs on 98 percent of goods immediately. It would also encompass regulatory cooperation, shipping, sustainable development and access to government tenders. The agreement is scheduled to be formally signed at a summit of EU leaders and Canadian Prime Minister Justin Trudeau in Brussels on October 27. The summit will then launch the ratification process with all of the EU's national parliaments as well as the Canadian parliament having to agree to the accord.

There are also concerns about CETA in other EU countries. Austrian chancellor Christian Kern has said that the German court ruling will strongly influence his country's position on CETA.

Kern said Austria's decision would also depend on negotiations still going on between EU states and Canada on a declaration accompanying the deal. "I hope that by then we have improved this contract enough that it is acceptable to us," he said. Canada has emphasized that the declaration will not add new elements to the deal.

In Belgium, parliament in the region of Wallonia passed a resolution in April opposing the ratification of CETA. The move was followed by the Brussels-Capital region in July, meaning that Belgium cannot give permission to the agreement at the upcoming Council of the European Union meeting.

Strong resistance against CETA is also reported from Slovenia, Hungary and Romania, the latter of which said its support was conditional on Canada agreeing to a separate deal to allow visa-free travel access.

The trade deal between the EU and Canada is also considered to help set the stage for a free trade agreement between the EU and the United States called Transatlantic Trade and Investment Partnership (TTIP). TTIP is facing even stronger opposition on both sides of the Atlantic.

Sigmar Gabriel's political future is secure after the majority of SPD delegates voted in support of the EU's trade deal with Canada. The Vice Chancellor had tied his fate to the outcome of the vote. (19.09.2016)

Tens of thousands of protesters took to the streets in Brussels to voice their concerns about the trans-Atlantic trade deals. But CETA is nearing completion. (20.09.2016)

EU ministers are clearing up the final points of contention in the CETA free trade agreement with Canada. TTIP talks with the US, however, seem to have broken down for good. Barbara Wesel reports from Bratislava. (23.09.2016)