The head of the Catholic Church in Germany admitted Friday he failed to appropriately handle a sex abuse scandal that unfolded in the early 1990s. 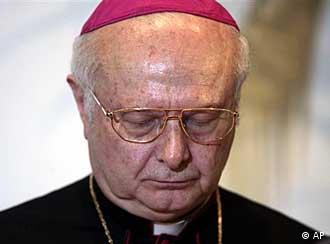 Zollitsch says he could have handled the case better

Germany's top Roman Catholic bishop has acknowledged that he made mistakes when dealing with sexual abuse allegations against a priest in his diocese. The priest is believed to have molested boys over more than two decades.

Robert Zollitsch, the Archbishop of Freiburg and head of the German Bishops Conference, acknowledged on Friday that he should have looked more intensely into sexual abuse allegations coming from the priest's congregation in 1992.

Zollitsch also said in a written statement that he regrets his diocese erroneously stated in March that it did not hear about abuse allegations before 1995 when in fact he had already began dealing with the case in 1992.

The case largely centers on the vicar of Oberharmersbach, from a parish some 55 kilometers from Freiburg, who is thought to have sexually abused boys in his charge over several years.

The man was given an early retirement in 1991 with no legal recourse. He committed suicide four years later.

So far, 17 men have come forward to the Freiburg diocese with sexual abuse allegations in relation to the vicar dating back to when they were between the ages of 10 and 16.

Zollitsch went on to say he should have sought more dialog with the victims and witnesses at the time he had been alerted to the cases.

"I beg for forgiveness with all my heart," Zollitsch said.

Zollitsch's comments come at a time when the Catholic Church is battling allegations of sexual misconduct by priests in countries across Europe and elsewhere.

Christians gather in Munich under specter of sex abuse scandals

As Protestants and Catholics gather in Munich for a vast church congress, Christian authorities in Germany are hoping the focus will remain on faith. But recent sex abuse scandals are looming large. (13.05.2010)

At the start of his visit to Portugal, Pope Benedict XVI has called the current sex scandal rocking the Catholic Church its "greatest persecution" and said the Church must recognize the "terrifying truth" of abuse. (11.05.2010)