Despite the popularity of e-books, public bookshelves are sprouting up across Germany. Everyone is welcome to take a book that piques their interest, or leave one they've already read. The amazing thing is, it works. 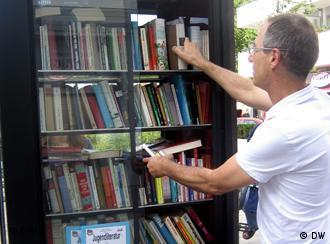 Take one or leave one

The GoltsteinForum plaza in Cologne is bustling. Locals are doing their daily shopping; some are drinking a cup of coffee in the café on the square. The big box in the center of this hectic rush is like an oasis, slightly out of place.

Taking a closer look, you can see that the shelves are packed with books. It's a colorful mix: Next to current bestsellers by Tom Clancy, Helen Fielding and Dan Brown you can find guidebooks to various cities, specialized books on dieting or woodworking and novels that sold like hot-cakes decades ago. Works by celebrated authors like de Beauvoir, Balzac and Proust are there as well.

"I always find an interesting book, there's a wide choice," says a young woman, taking a popular Dan Brown novel off the shelf. She is one of many bookworms who stop by regularly to look for something new - some even come every day.

The concept is simple: Take a book for free, and leave one you've already read, rather than let it gather dust on the bookshelf at home. 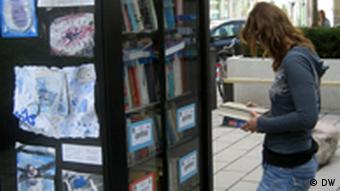 Surprisingly enough, the idea works. The shelves are not only always full, they're also kept clean and tidy. This can be attributed to a few reliable volunteers, says Michael Aubermann from the Cologne civic association, Bürgerstiftung Köln, which oversees the public bookshelf.

Known locally as the Bücherschrank (German for bookshelf), the project is an open platform; names are not registered like in usual libraries and anonymity is guaranteed.

"Everybody's welcome to take part," said Aubermann. And, considering the success it's seen, nearly everyone is.

That has inspired organizers to go beyond literature and also incorporate visual art. Students from local schools showcase their artwork, attaching it to the sides of the bookshelf and changing it every other month.

Similar projects exist have existed for a while in cities across Germany, but the Cologne initiative was launched in 2007 under the name Eselsohr. (The term literally means "donkey ear" and is used to refer to folding down a page in a book to mark it, like the English "dog-ear.")

At first, the Bürgerstiftung Köln tried out the idea in two IKEA shops in Cologne. IKEA sponsored the shelves, of course, and German actress Annette Frier took care of media promotion.

Last year, outdoor shelves were introduced. Designed by architect Hans-Jürgen Greve, these models are robust, weatherproof - and expensive, which makes it essential to find sponsors.

Since the bookshelf opened at the GoldsteinForum plaza near the Rhine River in Cologne, two more have been introduced in the city and another 24 are in the works. 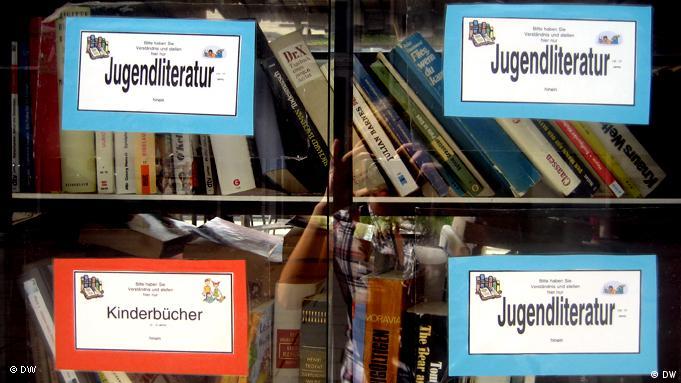 Youth literature and children's books have a special spot

"GoltsteinForum is a perfect location," said Aubermann. "It's a crowded shopping area and people can meet here and talk about books."

Volunteers visit the shelf regularly to straighten the books and remove any that are damaged. "There are also a lot of volunteers that we don't know," added Aubermann.

The team has never had a bad experience with vandalism. But to make the project work, it's not enough just to keep the shelf safe from ill-intentioned vandals, it also relies fully on the generosity of the community.

Does that make the public bookshelf a typical German phenomenon? Aubermann wouldn't put it that way. "It works here because mainly countries in the northern part of Europe have the tradition of common property," he explained. "People mostly take care of public goods."

But Aubermann says that similar projects would of course also work in other countries, even though it might take more time to establish the idea there.

Jonathan Littel's novel, "The Kindly Ones," broke old cliches about Holocaust criminals by portraying an intelligent and cultured but brutal Nazi. Now as a play, the story engages audiences in rethinking the past. (17.08.2011)

Charlotte Roche's first novel, "Wetlands," provoked readers with its explicit take on sex and bodily functions. The sequel, which hones in on the less exciting act of marital sex, has big shoes to fill. (16.08.2011)