Scientists in Berlin have said they aim to land two rovers on the moon next year. The mission for the Audi Lunar Quattro is to inspect the lunar rover left behind by the Apollo 17 mission in 1972. 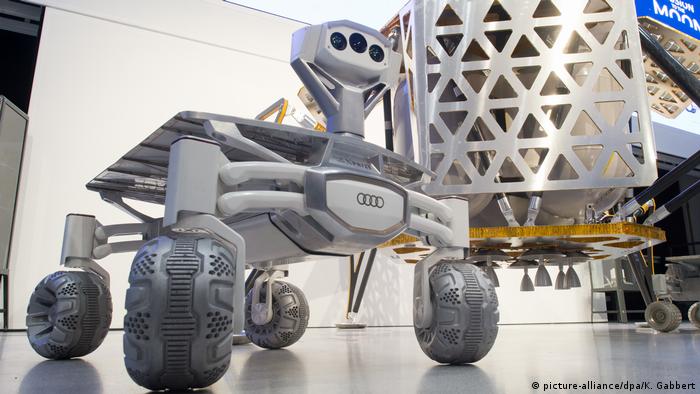 PTScientists made the announcement just ahead of the December 11 anniversary of Apollo 17's touchdown on Earth's only natural satellite in 1972.

Two mobile probes will have a mission to inspect the lunar rover left behind by the 1972 NASA landing, the last time humans were on the moon. PTScientists has signed a deal with broker Spaceflight Industries to secure a ride on a commercial launch vehicle which will transport the rovers from Earth to the moon next year.

The group has designed an Autonomous Landing and Navigation Module (ALINA) built to transport and land the two rovers on the moon.

The rovers, called an "Audi Lunar Quattro" and developed with contributions from German carmaker Volkswagen, are equipped with a 4-wheeled electrical drive chain, tiltable solar panels, rechargeable batteries and science-grade high-definition cameras. The probes are to be set down on the moon three to five kilometers (2 to 3 miles) from the place where Apollo 17 touched down in the Taurus-Littrow valley.

They would then move to within 200 meters of the Apollo site from where they should be able to send back high-definition images of the lunar rover.

NASA has asked for no landing closer than two kilometers and no probe to go closer than 200 meters, to preserve the area for posterity.

The scientists in Berlin are one of 16 teams competing for the $30 million (28.3 million-euro) Google Lunar X-Prize. The internet search company launched the prize in 2007, inviting scientists to compete in a challenge to land a privately-funded rover on the moon’s surface, drive 500 meters and send back pictures to earth.

The first of the 16 teams to meet the challenge is to receive a $20 million grand prize. The second team will pocket $5 million. Other monies will be awarded by Google for excess achievements, such as travelling an extra distance, detecting water ice and visiting Apollo sites.

Your object on the moon

PT, short for part-time, Scientists are an international team of 70 people spread across three continents. They include Jack Crenshaw, who was responsible for the trajectory calculations of the NASA Apollo program in the 1960s and 1970s.

The group has made a number of industrial partnerships to develop new space-graded technologies including power utilization, electronics, data hosting and optical systems. Partners include the German space agency DLR.

The scientists have offered to take objects with them to the moon for those prepared to pay the transport costs. The objects can be personal, commercial or technological. "In each case individuals, organizations or companies can buy 'payload' to bring their desired object to the moon," PTScientists said on their website. Offers were invited starting at 800,000 euros per kilogram.

The new rocket significantly increases China's payload capacity to meet its ambitous goals in space. China's space program includes opening a space station in 2022 and landing on the moon in 2024. (26.06.2016)

China says it has successfully landed an unmanned vehicle onto the moon, becoming the third nation to touch down on the surface of earth's satellite. It was the world's first soft lunar landing in nearly four decades. (14.12.2013)

Netflix's new miniseries fictionalizes the story of two Berlin internet pioneers who attempt to prove that Google stole their idea, worth billions.

Cellphones have a huge environmental footprint. One company trying to change this is Fairphone. As they announce their latest offering, DW asks whether a no-impact smartphone is even possible.