Germany's novice Pirate Party has positioned itself for two regional elections next month by fending off accusations of far-right infiltration and picking a defense ministry consultant as its new federal chairman. 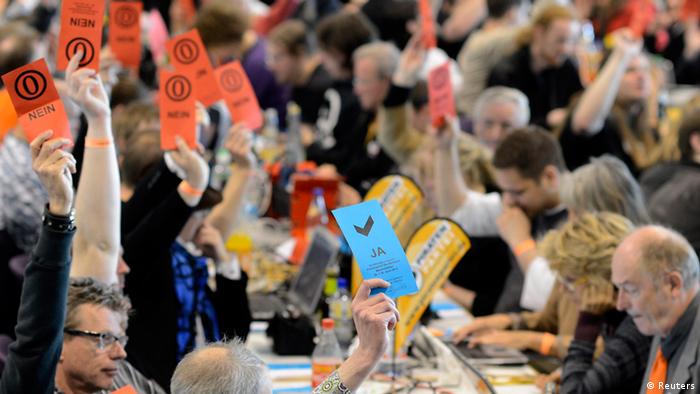 Germany's Internet-savvy Pirate Party, which recently won seats in two of Germany's regional parliaments, reshuffled its leadership at its congress in the state of Schleswig-Holstein, where regional elections take place next weekend.

The roughly 1,500 delegates assembled in the norther city of Neumünster on Sunday, most of them male, elected deputy-leader Bernd Schlömer as chairman from seven potential candidates. The post of secretary general, vacated by 24-year-old Berlin student Marina Weisband went to Johannes Ponader, a drama tutor.

Delegates of the Swedish-inspired party, whose manifesto so far has focused on libertarian views on internet freedoms, transparency and direct democracy, spent the two-day congress linked online via portable computers with many of the party's 28,000 members.

Schlömer, aged 41 and a consultant with Germany's defense ministry, urged delegates to "combat right wing extremism" in his candidacy speech, delivered on Saturday.

The Pirates responded with a standing ovation when they overwhelmingly passed a motion declaring the Holocaust as an "undeniable part of history."

To deny or relativize the murder of six million Jews by Nazi-Germany "violates the principles of our party," their motion said.

Controversy had erupted recently when a handful of Pirates suggested that denial was covered by freedom of expression. Two members were outed as former far-rightists.

Schlömer, whose election amounted to a swapping of roles with the Pirates' previous leader Sebastian Nerz, said on Sunday that his aim - leading up to Germany's federal election next year - was to facilitate the drafting of a complete policy manifesto.

He told delegates that their admitted lack of policy on a broad spectrum of issues had to be overcome. "It is not correct to lack opinions," he said.

The Pirates first won seats last year in the Berlin state legislature by garnering 8.9 percent. Last month, they entered the assembly in the tiny, western state of Saarland by winning 7.4 percent.

While the Pirate movement in Serbia and Romania is struggling for recognition as a political party, it is already campaigning in Croatia. Pirates in Greece have their eyes on winning seats in parliament. (29.04.2012)

The Free Democrats crashed out of that parliament in the same election, winning just 1.2 percent of the votes, adding to a downward spiral that has left them short of the standard five percent threshold to win seats.

Beyond Schlieswig-Holstein, surveys show the Pirate Party also drawing around 9 percent in Germany's most populous state, North Rhine-Westphalia (NRW), which votes for a new Dusseldorf-based state assembly on May 13.

Current NRW premier Hannelore Kraft and her Social Democrats (SPD), together with the Greens, are seeking re-election after their minority government collapsed in March on the issue of balancing a debt-loaded budget.

Merkel's conservatives lost NRW in 2010 to Kraft. Her current challenger for state premiership is Federal Environment Minister Norbert Röttgen, one of Merkel's cabinet stars. He has declined to say whether he would give up his ministerial post.

The mass-circulation tabloid Bild quoted political analyst, Klaus-Peter Schöppner of the research institute Emnid, on Friday as saying the Pirate Party had reached its zenith.

"The attractiveness of the new, unknown other, the anti-establishment party, only applies for a certain period," Schöppner said.