Raphael Holzdeppe is Germany's first ever world champion in the pole vault at the World Athletics Championships in Moscow. He came ahead of favorite Renaud Lavellenie. 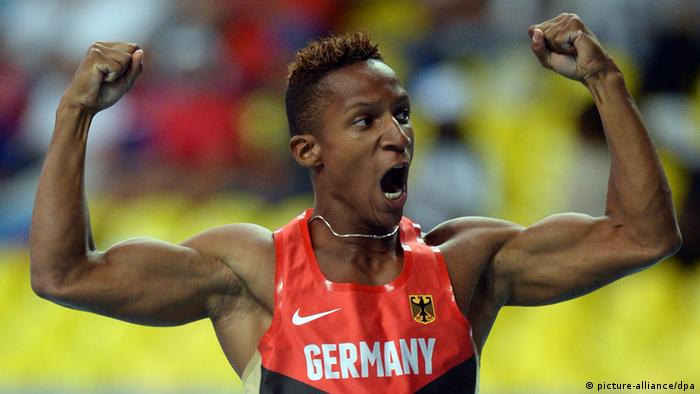 Holzdeppe was the shock winner of the men's world pole vault title on Monday as he beat Frenchman Renaud Lavillenie on countback. Both men failed three times to clear 5.96 meters but the German had made no mistakes in moving up to notch 5.89 meters.

"It's just amazing," the sportsman said after the event. "I felt good, but I just didn't think it would happen." He said favorite Lavallenie - whose nickname is Air France - was always a force to be reckoned with, but even he "is only human," Holzdeppe said.

Holzdeppe, who hails from the southwestern town of Zweibrücken, is the first German to take gold in the pole vault event.

Meanwhile, German shot-putter Christina Schwanitz took silver in Moscow. With 20.41 meters she topped her personal best by 22 centimeters. "Personal best at the world championships - what more could I want?" Schwanitz, who is from the eastern state of Saxony, said. New Zealand rival Valerie Adams took the gold medal, with an exceptional 20.88 meters.

Jamaica still boasts the fastest man and the fastest woman in the world. Shelly-Ann Fraser-Pryce followed fellow Jamaican Usain Bolt and took gold in the 100-meter sprint on Monday. Fraser-Pryce did the 100 meters in 10.72 seconds.

At the end of day three, the United States leads the medals table with three gold and six overall. Germany is second with four medals.

Michael Schrader has come up with a personal best to win the silver medal in the decathlon - Germany's first - at the World Championships in Moscow. Jamaican sprinter Usain Bolt did what was expected of him. (11.08.2013)

Great Britain's Mo Farah has started the 2013 athletics world championships with a victory in the 10,000 meters. Kenya's Edna Kiplagat defended her marathon world title from 2011 as well. (10.08.2013)