Members of Germany's opposition Green party instructed their leaders at a party congress over the weekend to withdraw their support for the German military engagement in Afghanistan. 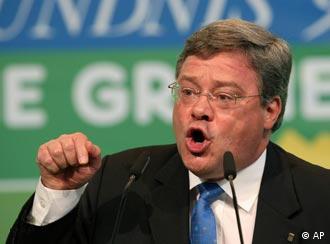 The Green party base parted its ways with chairman Reinhard Bütikofer

At special party congress in the central German city of Göttingen, a majority of 800 delegates rejected the party leadership's position by voting against its motion to unconditionally approve the planned extension of the German Army's mandate in Afghanistan.

Green party chairman Reinhard Bütikofer warned delegates that an immediate withdrawal from Afghanistan "would not bring peace but a new escalation of violence, war and civil war."

But, instead, the party base decided that its representatives in the German parliament must vote against continued use of the army in Afghanistan if fighting was involved.

While the decision cannot actually affect Germany's current foreign policy -- since Chancellor Angela Merkel's coalition government does not need opposition votes for a renewal of the troop's mandate next month -- it is indicative of the deep split which has developed within the Greens. 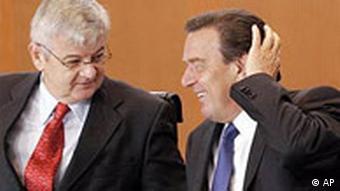 The traditionally pacifist Greens made a U-turn when it comes to German military operations abroad during their time in a coalition with Social Democratic Chancellor Gerhard Schröder from 1998 to 2005.

The decision to support German peacekeeping operations abroad has divided the party ever since.

"I still believe this was the right thing to do and we will stand by our responsibility," Bütikofer said of the deployment at the congress, amid heckling and booing by delegates.

A turning point for the Greens

Rejecting the expected renewal of the troops' mandate in Afghanistan, the rank-and-file members of the Green party effectively reversed the controversial changes in foreign policy that were ushered in by Schröder's foreign minister and former Green party leader Joschka Fischer. 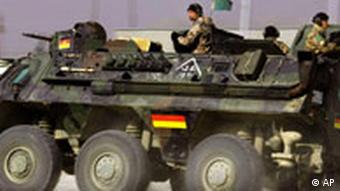 Germany's military presence in Afghanistan has divided the Green party

"The result of the party congress marks the temporary end of a 10-year-long struggle over the pragmatist foreign policy course a la Joschka Fischer," said political scientist Hubert Kleinert in an op-ed for the Web site of the German weekly Spiegel.

"On the other hand, this also means, for the time being, the end of all speculations about a possible sharing of power in the federal government beyond the Red-Green coalition," Kleinert said, alluding to the speculations that the Green party might form a coalition with Merkel's Christian Democrats (CDU) and free-market liberals (FDP) after the next elections.

FDP leader Guido Westerwelle said the Green party discredited itself as a potential coalition member in the future.

"To those in the [Christian Democratic] Union, who are still hoping for a black-green coalition, I can only say: 'Have fun!" Westerwelle told the daily Frankfurter Allgemeine Zeitung, referring to the traditional color of the CDU. 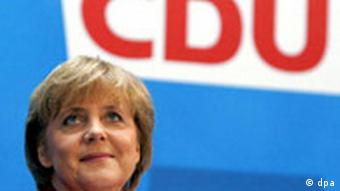 German Chancellor Merkel wants the troops to stay in Afghanistan

Rejecting criticism by some political leaders and opinion polls showing waning support for the German military presence in Afghanistan, Merkel said on Saturday she wanted the troops' mandate to be extended.

"There is no alternative," Merkel said in her weekly video podcast. "This military commitment is important for those who live in Afghanistan but also for the security and freedom of German citizens."

Germany currently has some 3,000 troops deployed in northern Afghanistan as part of the NATO-lead International Security Assistance Force (ISAF). Germany has also sent six reconnaissance Tornado jets to Afghanistan to assist ISAF operations throughout the country.

The German army's mandate prevents it from being used in the south, where military casualties are higher.

DW-WORLD.DE takes a closer look at the current troubles on Germany's political landscape. (14.09.2007)

Democracy has to be defended on a daily basis, but political parties aren't the only ones responsible: Citizens also have to do their part, writes Omid Nouripour in his guest commentary for DW-WORLD.DE. (14.09.2007)