Germany's Green Party is setting up a branch in the United States. The bottom-up initiative aims to bring a more international perspective to the party's work and combat anti-Americanism among some members back home. 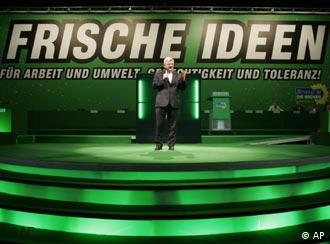 The Greens aim to tap into "fresh ideas" stateside

The chapter is due to be officially founded next weekend in Washington DC. It hopes to tap into the experiences of the growing number of Germans working in the US capital in international organizations, foundations and think tanks, as well as in the media, the culture industry and higher education.

"We've discovered that there are a lot of Germans in town who are young, tolerant and cosmopolitan and who share Green values or are active in the Green party," said chapter co-founder Arne Jungjohann. "We want to offer them a platform."

But the group is also looking to engage with Greens across the United States and has set up a Facebook presence to allow those living further afield to contribute to the debate.

"Our purpose is to have a group that is following German domestic politics and influencing the Green agenda in Germany on international topics," said Jungjohann, who is also Environmental Program Director at the Boell Foundation.

Anti-Americanism is another area where the group believes it could have important input. 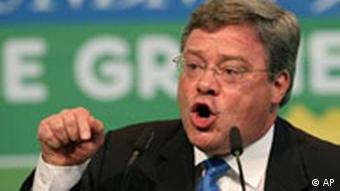 Reinhard Buetikofer, co-leader of the Greens, welcomed the establishment of the party's Washington DC branch, saying it was a positive sign for bilateral dialogue.

"This is not supposed to be a one-way street -- it's an exchange, it's about cooperation," Buetikofer said. "It will attest to the fact that the Green party is open towards exchange with the United States."

You do not have to be German to join the group, but an affiliation with Germany is required and German will be its working language.

It is the Greens' second branch abroad. The party also has a group based in Brussels, the headquarters of the European Commission.

25 Years After Greens Upset German Politics, Left Does the Same

The Green party entered Germany's parliament a quarter of a century ago, fundamentally changing the country's party landscape. This year's anniversary comes as the Left party is on its way to doing the very same thing. (06.03.2008)

As a former German president called for constitutional changes to ensure stable coalition governments, traditional rivals in the Green and conservative camps said they would work to reach a power-sharing deal in Hamburg. (07.03.2008)

Germany's Greens voted in favor of extending social benefits but rejected a proposal that would guarantee a basic income to everyone at a key party congress that ended in the city of Nuremberg on Sunday, Nov. 25. (25.11.2007)

Are you involved in a political party? Can such involvement create positive change? Please include your name and country in your reply.