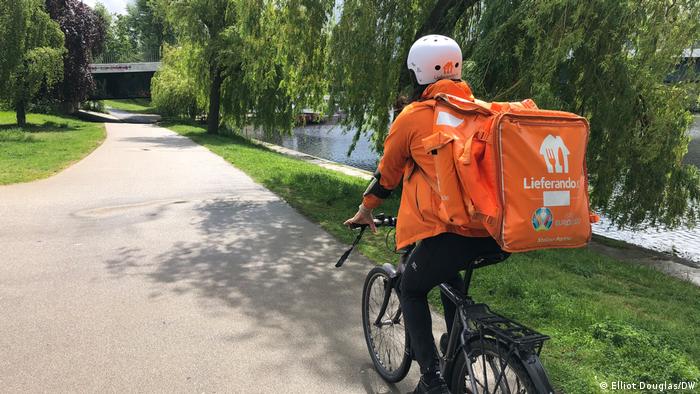 "It is much nicer to do this job now than when there was snow on the ground," Miguel laughs, as he cycles through a leafy Berlin park by the river under the midday May sun, clad in the ubiquitous bright orange Lieferando delivery uniform.

Minutes before, he switched on the Scoober app, the main working tool for him as a delivery driver. The app told him where to go to make his first delivery of the day, and he is even given an exact route to cycle: a 7-kilometer round trip to a sandwich shop and then onto an address in Berlin Mitte where a customer awaits their lunch.

As soon as the app is activated, Miguel, who did not want to use his real name, is also handing over his phone's GPS information to supervisors and managers of Lieferando. He happily ignores the suggested route to head through the park – but the app, which monitors his location through this 6-hour shift, has saved this data.

This delivery takes around 45 minutes; Miguel earns just under €10 ($12) an hour. Sometimes the customer adds a tip; in this case, they do not.  The app tells him that he was three minutes late in the delivery; another data point that will be saved for the managers of Lieferando to examine if they wish.

Miguel is one of 5,000 new delivery drivers that Lieferando, Germany's biggest food delivery service, hired since the first lockdown of the coronavirus pandemic in March 2020. Back in his native Brazil, 36-year-old Miguel worked in an office job for the government. But in Berlin, he said, his options were limited because he did not speak German when he arrived in 2020. 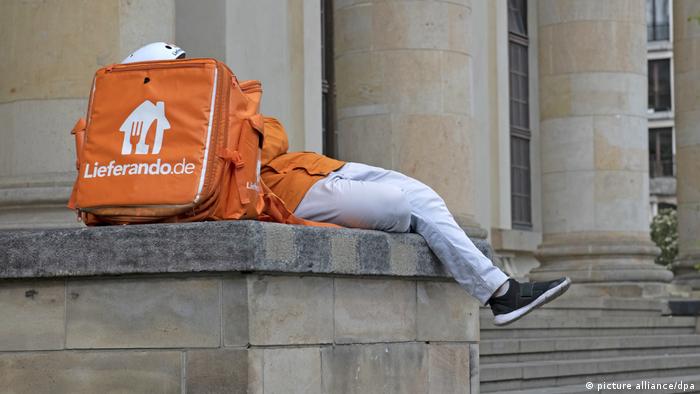 Even short unplanned breaks by drivers may be tracked

His employer, which is owned by Dutch multinational Just Eat Takeaway and operates under different names in 23 countries, was last week accused in the German media of illegally monitoring and collecting workers' data. Under the EU General Data Protection Regulation (GDPR), individuals have the right to know what personal data companies store about them and employers should not closely monitor employees' location and data — making this monitoring illegal.

In 2019, the Berlin State Commissioner for Data Protection slammed competitor Delivery Hero with a €195,000 ($238,000) fine for violating the GDPR. Delivery Hero's business in Germany was bought out by Just Eat Takeaway in 2018.

"The close monitoring of employees in the employment relationship is not permissible under data protection law, regardless of the type and location of a company," commissioner Maja Smoltczyk told DW.

But in a statement to DW, Lieferando denied misusing drivers' data: "It is needed to assign orders to drivers and for the 'food tracker' feature that allows restaurants and consumers to check the status of their order. The data is not used for unauthorized performance or behavioral monitoring, and we inform our drivers how we use the data and for what purpose. In addition, as an employer, we are required to store it for six years for payroll purposes. The app is used to determine order bonuses, mileage allowances, overtime, and it is where drivers enter their working hours."

Takeaway.com was set up in 2000 in the Netherlands and after acquiring British company Just Eat in 2020 it became the largest food delivery service in the world. In Germany alone they employ over 10,000 drivers and its profits rose during the pandemic year where restaurants and cafes mostly closed their doors to dine-in customers.

Demand for convenience drives next evolution in food retail

But monitoring of location may not be the only violation under the GDPR, which also requires companies to tell app users what data they store about them.

Konstantin, aged 32, moved from his home country Greece to Berlin last year to kick off a career in web development and has worked for Lieferando part-time since March. He is aware that his data is tracked minutely, and that he does not the full extent of this tracking – for example, if the Scoober app can collect data from other apps on his phone.

"I don't feel comfortable knowing they collect my location or my data. But I know other apps on my phone — Facebook, Google Maps — do the same. But it is a concern," he told DW.

He said sometimes he takes longer breaks or does not follow the map exactly — and has not yet been criticized for it, although he knows this is being tracked. But for him, the way he is treated in the job is more important.

"I don't want to be treated like just a delivery boy," he said. "One restaurant worker was really rude to me and yelled when I went to pick up food because I was listening to music while I waited. That really annoyed me."

For Miguel, regulation is the problem; but he said as long as a large number of delivery cyclists in Germany come from countries where workers' rights are even less protected, he suspects there will be little momentum for change. 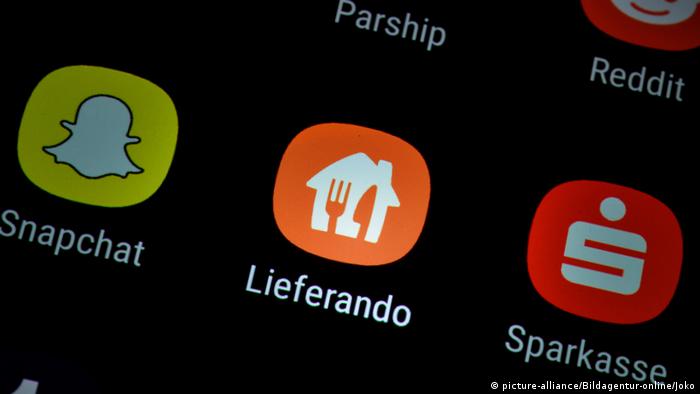 Lieferando is the most popular food delivery service in Germany

'Digital company in the real world'

It is impossible to estimate an average salary for Lieferando drivers in Berlin, as so many work only for a few hours a week, but for someone like Miguel it gives him a little over €1,000 a month. Rent in a shared apartment in Berlin can begin at around €400 a month, while drivers also have to have their own private health insurance. In comparison to average wages in countries like Brazil or India, these working conditions may seem advantageous.

But Lieferando is only one of many delivery companies out on the streets of Berlin. Unlike Lieferando, many of these do not directly employ workers, instead contracting them out through third parties. Under current European labor laws, such an arrangement is legal. Earlier in May, Spain became the first EU country to require food delivery companies to give their riders workers' rights.

Additionally, for the majority of bikers, the job is only a temporary fix; Miguel will leave Berlin in a few months, while Konstantin hopes to get a full time job in web development soon.

"Lieferando will do just about the minimum that is allowed under German law in terms of data security, payments and workers' rights," Miguel added, shrugging. "They are a digital company offering a real-world service. The laws have not kept up."

Back in Berlin Mitte, seconds after his first delivery is done, the Scoober app on his phone beeps; there is another assignment this time even further across the city. He smiles ruefully and cycles off.

This article was updated to correct a factual error

The foot soldiers in the food delivery wars