Germany Welcomes UN Resolution on Lebanon | Germany| News and in-depth reporting from Berlin and beyond | DW | 12.08.2006

German Chancellor Angela Merkel on Saturday welcomed a UN resolution calling for an end to the bloodshed in the Middle East and urged its "swift and consistent" implementation. 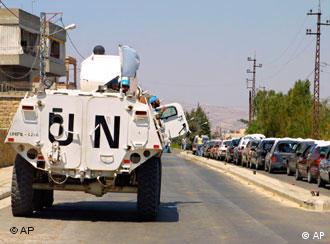 The resolution calls for 15,000 UN peacekeepers to be deployed in Lebanon

"This is an important sign of the international community's determination to put an end to the military operations," said the chancellor, whose government has called for a diplomatic solution since the start of the month-old conflict between Israel and Hezbollah.

"Now it is a question of implementing the resolution swiftly and consistently," she added, without saying whether the German army would take part in a United Nations force in Lebanon.

UN Security Council Resolution 1701, drawn up by the United States and France and adopted late Friday, calls for an end to the bloodshed between Israel and Hezbollah. It also calls for Israeli troops to be withdrawn from southern Lebanon after an end to the fighting -- the timing for which has yet to be agreed with Lebanon -- and for the deployment of a 15,000-strong international peacekeeping force to prevent further conflict.

Just hours after the resolution's adoption, Israeli troops and tanks poured deep into Lebanon, on Saturday, in a broad "open-ended" offensive.

"This operation is aimed at preventing Hezbollah from firing rockets into northern Israel and is not limited in time," Israeli government spokesman Avi Pazner said.

An army spokesman said the new ground operation, launched after a security cabinet decision last Wednesday, could extend up to the strategically important Litani River which runs up to 30 kilometers (19 miles) from the border. One military official said the operation could last weeks and even extend beyond the Litani.

The Litani has served as a strategic limit for Israel's operations in Lebanon since it first invaded its northern neighbor in 1978, leading to a long and bloody occupation that ended only six years ago. 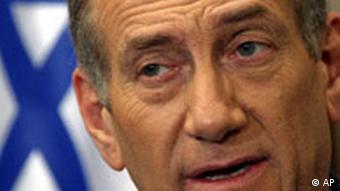 Olmert's popularity in Israel has fallen as the conflict has continued

With Israel pursuing its military offensive, Prime Minister Ehud Olmert said he would urge his cabinet to accept the Security Council resolution when it meets Sunday, according to a government spokesman. Pazner had said before the resolution was adopted that the military operation "could be stopped at any moment."

The Lebanese cabinet was also to meet Saturday and US officials said it was expected to accept the resolution, which also calls for the release of two Israeli soldiers whose abduction by Hezbollah triggered the war on July 12.

UN Secretary General Kofi Annan criticized the time world powers took to reach a resolution on ending a conflict that has claimed more than 1,200 lives, most of them Lebanese civilians.

"All members of this council must be aware that this inability to act sooner has badly shaken the world's faith in its authority and integrity," he said.

Lebanon's acting Foreign Minister Tarek Mitri expressed profound doubts about the likelihood of the resolution being able to end the war. 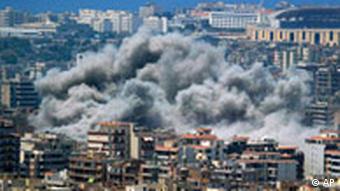 More than 1,100 people have been killed in Lebanon and more than 900,000 displaced while Israel's bombardments have laid waste to the only international airport, roads, bridges and power stations and effectively cut the country off from the outside world.

Israel's ambassador Dan Gillerman laid the blame for the conflict on Lebanon and said the issue would return to the United Nations if Lebanon failed to implement its side of the proposed ceasefire.

Thirty-eight Israeli civilians and 82 of the country's soldiers have been killed since the conflict started.

In a warning to Hezbollah's main backers, meanwhile, US Secretary of State Condoleezza Rice warned Iran and Syria to respect the resolution.

"We call upon every state, especially Iran and Syria, to respect the sovereignty of the Lebanese government and the will of the international community," she told the Security Council. She also said "Hezbollah now faces a clear choice between war and peace", adding that the resolution "helped to open a path to lasting peace between Lebanon and Israel."

The text authorizes an increase in the current United Interim Force in Lebanon's strength to a maximum of 15,000 troops from its current size of about 1,190 troops. They will be matched by the 15,000 troops Lebanon plans to send to the south. 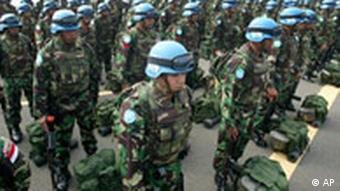 Indonesian soldiers are prepared to be sent to Lebanon as peacekeepers

The UN force will monitor the cessation of hostilities and any permanent ceasefire and back up Lebanese armed forces as they deploy across the region now dominated by Hezbollah.

The resolution gives the UN force the power to "take all necessary action in areas of deployment of its forces, and as it deems within its capabilities, to ensure that its area of operations is not utilized for hostile activities of any kind."

French ambassador Jean-Marc de La Sabliere said he thought the extra troops could be deployed "very swiftly". A US official said a meeting could be held at the UN headquarters on Saturday for potential troop contributors.

Should Germany Send Peacekeepers to Lebanon?

DW-WORLD.DE readers sounded off on whether Germany should send troops to Lebanon as part of a possible UN peacekeeping force in the current conflict between Israel, Lebanon and the Hezbollah. (Aug. 10, 2006)

Members of Germany's opposition are calling for a suspension of arms deliveries to Israel until the end of the current conflict. Germany has a long history of providing Israel with weapons and their components. (Aug. 10, 2006)

After meeting with his Israeli counterpart on Wednesday, German Foreign Minister Frank-Walter Steinmeier said that Hezbollah's presence near the Israeli border could no longer be tolerated. (Aug. 9, 2006)