German authorities are on high alert after neighboring Belgium and the Netherlands issued a recall for millions of contaminated eggs. The scare was caused by a toxic insecticide that could adversely affect human health. 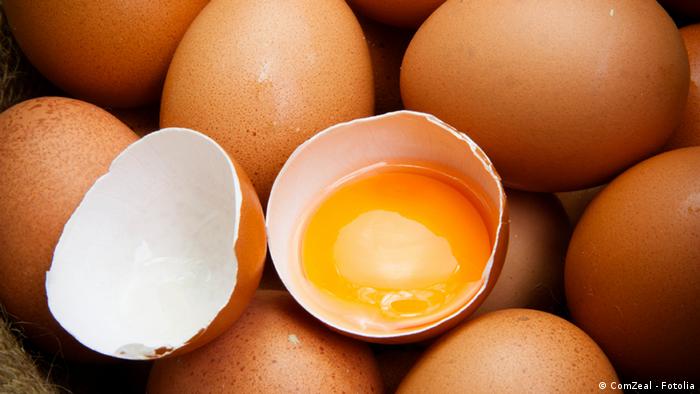 Germany's agriculture ministry said Tuesday it had set up a monitoring system to make sure no tainted eggs made it onto supermarket shelves.

Millions of eggs have been recalled in Belgium and the Netherlands over the past few days after they were found to contain high levels of the insecticide fipronil. According to the World Health Organization, the highly toxic substance can cause damage to the liver, thyroid glands and kidneys if ingested in large amounts. In higher doses it can cause vomiting, headaches and skin and eye irritation.

A spokesman from Germany's agriculture ministry told news agency DPA there shouldn't be any affected eggs still in circulation in Germany, but he said officials were inspecting packing centers as a precaution. Eggs with fipronil were found at one such center in the western state of North Rhine-Westphalia, prompting the state to issue a recall for nearly 900,000 eggs from batches marked as 1-NL 4128604 or 1-NL 4286001.

"We've never seen fipronil before, that was something new for our experts," the German agricultural ministry spokesman said, but added that there was no health risk.

Massive recall over the border

Meanwhile, about 130 poultry farms have been shuttered in the Netherlands "due to the presence of the suspect substance fipronil" which had been found in samples taken from "eggs, droppings and meat," the Dutch food safety agency NWVA said Tuesday.

It added that about a million eggs being transported to Germany had been recalled from the border with the Netherlands.

Prosecutors are looking into how the eggs came to be contaminated. While fipronil is a common ingredient in veterinary products for getting rid of fleas, lice and ticks, it is banned from being used to treat animals destined for human consumption such as chickens. However, one Dutch company reportedly used the substance to control red lice in their chicken coops.

"We are still estimating the number of farms which have been affected, and the analysis of 600 samples is still ongoing," a spokesman for the NWVA told news agency Agence France Presse. "Affected farms must have all eggs destroyed by a specialist firm and submit to the NWVA a plan to evacuate the birds' droppings to preserve the environment."

Late Monday, the NWVA sent out a warning to consumers that eggs with X-NL-4015XX stamped on them had dangerously high levels of the insecticide.

Chickens can remain contaminated for between six to eight weeks.