The German cabinet has approved plans for Germany to buy a stake in the China-led Asian Infrastructure Investment Bank that will make it the fourth largest shareholder. It'll also provide financial guarantees. 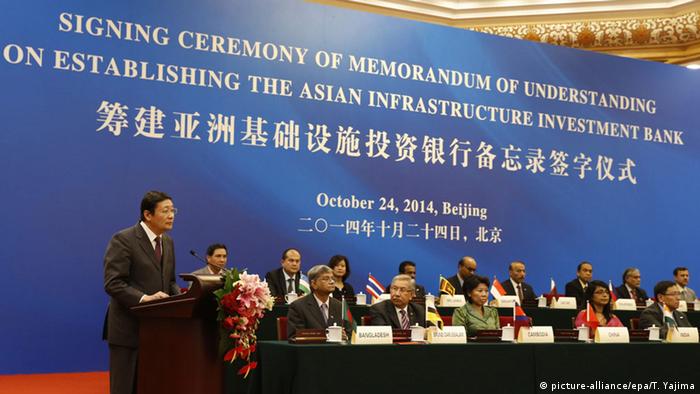 Germany is to acquire a 4.1-percent stake in the Asian Infrastructure and Investment Bank (AIIB), which would make it the fourth largest stakeholder after China, India and Russia. The German government approved a draft proposal on Wednesday, which will still have to pass through both houses of parliament.

Relevant documents said the AIIB would have a capital base of $100 billion (88.6 billion euros). "Germany's capital investment will most likely amount to some $900 million, to be contributed between 2016 and 2019," the draft plan stated, adding that the deal would also involve a further $3.6 billion in financial guarantees.

The AIIB is designed to raise more resources for infrastructure projects across Asia, with support also coming from 13 other European nations, including fellow G7 countries France, Britain and Italy. The founding charter is scheduled to be signed on June 29 in Beijing.

The US, Japan and Canada have remained skeptical of the lender, assuming that China could misuse its dominant role in the bank for pushing its own geopolitical agenda.

Washington also fears the AIIB will pose a significant challenge for the International Monetary Fund (IMF) and the World Bank where it wields huge influence.

The Wall Street Journal reported Tuesday that China would ultimately have veto power over major decisions of the AIIB after providing almost a third of the lender's overall capital base, giving Beijing an estimated 25 to 30 percent of total votes.

US farmers worry about expensive fertilizers 15.08.2022

Famers in the US face big problems getting their hands on enough affordable traditional fertilizers that usually come from Russia and Belarus.