Weather officials issued a storm warning for parts of western Germany, while Bavaria might face flash floods. Across the country, survivors of last week's tragedy are bracing for more heavy rain. 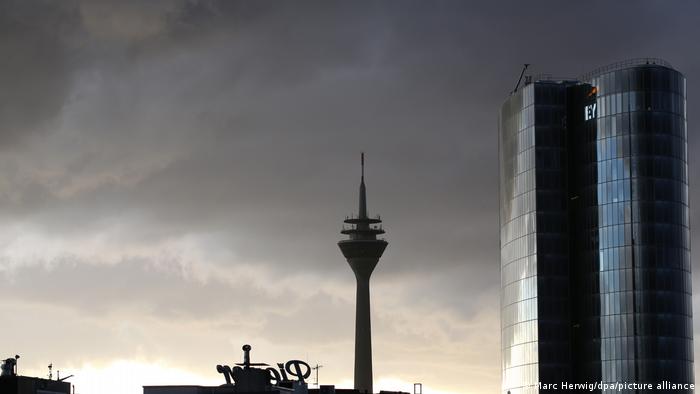 Storm clouds are looming over North Rhine-Westphalia once more

Heavy showers and gusts of wind of up to 70 kilometers (43.5 miles) per hour were scheduled to hit parts of northwest Germany on Saturday, the country's weather agency DWD said. In the southern state of Bavaria, weather experts warned that "extreme flash floods" were possible.

However, the scope of the storms is expected to be far less severe than the heavy rainfall which caused catastrophic floods and resulted in almost 200 people losing their lives last week. Some 30,000 survivors are still without electricity or drinking water.

The floods have devastated multiple regions in the states of North Rhine-Westphalia and Rheinland-Palatinate, which are now bracing for even more rainfall.

German authorities offered evacuation to residents of the recently flooded areas along the Ahr River, according to public broadcaster WDR.

Localized showers are expected in the river valley.

While the situation is "not as dire as last week" the region no longer has a properly working sewage system, said the head of the local emergency response staff. This would make the effects of the rain different then before.

The weather agency also warned of increased storm risk in the state of Saarland, which borders Rheinland-Palatinate. Germany's southern Alpine regions, near Switzerland and Austria, are also at risk of "severe thunderstorms with strong showers, squalls ... and hail."

German authorities said they were using social media and flyers to warn people in areas that might be affected.

Storms likely to be 'localized'

It is predicted this weekend's weather will include heavy showers, thunderstorms and hail, but experts also said storms are expected to be "strictly localized."

Rainfall of around 10 to 25 liters per square meter (57 to 142 cubic inches per square foot) over a one to three-hour period is anticipated in North Rhine-Westphalia, which is Germany's most populous state.

In isolated cases up to 40 liters per square meter (227 cubic inches per square foot) of rain is possible.

However, as we move into Sunday, the showers and thunderstorms will move with some momentum in a northerly direction towards Lower Saxony, where the storms are expected to dissipate.

DPA contributed to this article

Interior Minister Horst Seehofer has signaled his support for emergency text alerts on public broadcaster ARD. Privacy concerns have so far kept such mechanisms out but deadly floods have led to new support.

Extreme weather: Why people risk their lives to save their homes

Extreme weather is on the rise worldwide: heavy and severe rains, flash floods and landslides have also occurred in Germany.