Germany Sign Off With Comfortable Win to Seal Third Place | News and current affairs from Germany and around the world | DW | 08.07.2006

Germany Sign Off With Comfortable Win to Seal Third Place

Germany's World Cup heroes gave their loyal support a game to celebrate and the title of third placed team at the 2006 World Cup by comfortably beating Portugal 3-1 in Stuttgart. 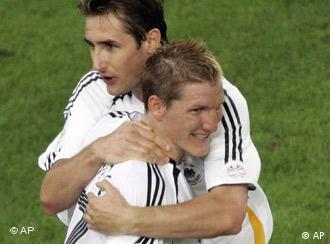 Host nation Germany had the consolation of securing third place at the World Cup by defeating Portugal 3-1 in the play-off in Stuttgart on Saturday.

Bastian Schweinsteiger was the hero scoring two great individual goals and having a hand in the other when his fierce cross shot forced an own goal from Armando Petit.

The win gave the home fans something to cheer but both losing semi-finalists will be green with envy when they sit down to watch Sunday's World Cup final in Berlin between France and Italy.

Germany lost 2-0 to Italy in extra-time of their semi-final while Portugal went down to a 1-0 defeat at the hands of France. 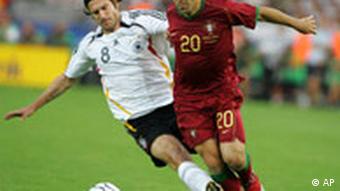 The third-place match was a day of fond farewells with Portuguese legend Luis Figo coming on in the 75th minute for his 127th and final international appearance.

Germany goalkeeper Oliver Kahn, winning his 86th cap, is also expected to say goodbye to international football and had the honor of captaining the team.

Veteran goalkeeper Kahn, 37, also started in goal for his first appearance at these finals after playing understudy to Jens Lehmann. 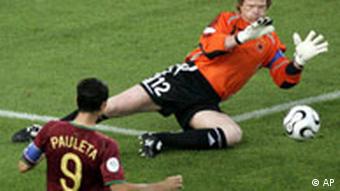 Germany started the better but the first opening fell to Portugal on the quarter-hour mark only for Pauleta to fluff his lines.

Germany's 21-year-old striker Lukas Podolski, voted best young player at the finals, then stung the palms of goalkeeper Ricardo with a free-kick.

Miroslav Klose, top-scorer at the finals with five, went close shortly afterwards but missed the chance to stretch his lead in the race for the golden boot.

France's Thierry Henry has three to his name and has Sunday's final to catch up Klose. 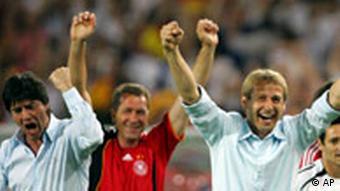 Germany finally took the lead on 56 minutes through Schweinsteiger. The Bayern Munich midfielder, dropped from the starting line-up for the semi-final defeat against Italy, cut infield and hammered a swerving shot with his right foot that flew past Ricardo.

Five minutes later Schweinsteiger drove a fierce cross into the area and Petit deflected it into his own net.

Schweinsteiger struck again in the 78th minute with another terrific drive to cap a fine display.

Substitute Nuno Gomes pulled one back late on dive heading in a brilliant cross from Figo but it was to be Germany's day.

Review all the highlights from the match for third place between Germany and Portugal with the DW-WORLD.DE live ticker. (July 8, 2006)

"You Are Heroes," Shocked and Disappointed Germans Say

After losing the World Cup semi-finals to Italy Tuesday, the host nation reflects on what might have been but say that they are proud of their team's accomplishments. (July 5, 2006)

Jürgen Klinsmann will need to dig deep into this bag of motivational tricks to get his downcast Germany team up and ready for the third place play-off game against Portugal in Stuttgart on Saturday. (July 8, 2006)

For the first time in over four decades, the authorities in Iran have allowed female fans to attend a men's league match. However, this may have been mainly motivated by a threat issued by FIFA.