Germany Set to Abolish the Draft

Young German men could soon be free of compulsory military service. But abolishing the draft may pose a serious problem for the social system, which depends on those men that opt for the alternative -- community service. 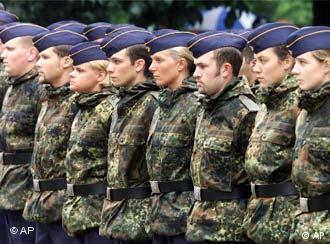 Bundeswehr recruits: in the future, only on a voluntary basis.

German politicians have long been debating plans to abandon the draft in favor of a professional army. But getting rid of conscription would also entail an end to its alternative -- community service.

The details are as yet unconfirmed, but the government this year looks set to shorten the length of compulsory community service from 10 to nine months -- the same that is required for military service.

According to reports in the Financial Times Deutschland, this would be the first step towards a phase-out of both military and community service by 2008. A government spokeswoman declined to comment on the reports ahead of a meeting on Thursday, when the Minister for Family Affairs Renate Schmidt, is due to present her report on the future of community service.

Around 90,000 young German men are registered yearly for community service, and approximately 80 percent end up working in hospitals or senior citizens' homes doing essential work such as driving ambulances, caring for the disabled and elderly, and delivering meals. 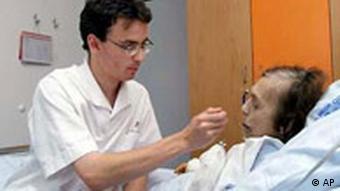 Charitable organizations fear there will be "catastrophic" consequences for healthcare in Germany if this inexpensive and valuable workforce were to disappear. Joachim Kendelbacher from the Workers' Welfare organisation told Deutsche Welle that his organisation, which currently employs around 6,000 people doing their alternative community service, would suffer heavily if their jobs were to be cut.

"We’ll have to consider if the services these young people are doing can be totally abolished," he said. "In some sectors this will certainly be the case. I’m thinking of services like going for walks with old people in the nursing homes, reading literature to old people or doing office work. If these services are cut this definitely means a loss in quality."

Schmidt has said that, should community service be cut, she is demanding a five-year phase-out period. "Assuming that the decision to end community service comes in this year, we'd need until 2010 to come to terms with the reorganization that would be needed," she said. "We can't just get rid of conscription overnight. Otherwise essential social structures would simply break apart."

Schmidt said that she is generally not against mandatory service. "But the duties of the armed forces have changed. Aside from this, we can't provide for the military when, each year, we're only getting less than half of the people up for service into the military."

Holding onto compulsory community service once military service is abolished would be unconstitutional in Schmidt's view. She says voluntary service should receive more recognition and more financial backing, perhaps from the €885 million a year currently spent on the community service program.

German Defence Minister Peter Struck is already preparing the armed forces structurally for the post-conscription era of fewer troops and a tighter budget. He's reported to be planning cuts in armament projects for a projected savings of €26 billion.

Over the weekend, Struck said that in times when Germany is having to enforce painful cuts in the social and welfare system, the armed forces also have to expect budget cuts.

"All of my 12 predecessors have had to deal with the same phenomenon," Struck said in an interview with the Bild am Sonntag newspaper. "The soldiers want more money than is available. This is nothing new."

Struck said all divisions of the armed forces -- naval, air and ground troops -- will have to shoulder their share of the cuts, and that the government will buy only the most necessary pieces of equipment. Planned purchases of tanks and helicopters may either have to be downsized or cancelled. Some military bases will be closed.

However, Struck said the cuts are in keeping with an overall restructuring plan for the Bundeswehr to prepare it for new strategic objectives within the NATO alliance and the planned European rapid response force.

The Pentagon has confirmed the United States will pull armored units from Germany as it realigns its military. Separately, the German Defense Ministry is reportedly planning massive budget cuts for its own armed forces. (Jan.10, 2004)

At an event called “Scoolday,” the German military kicked off its first ever country-wide recruitment campaign for its officer-training program. The Bundeswehr’s new secret weapon: pop-starlet sex appeal. (Jul. 08, 2004)